Home/ ACU News/ Alumni News/ Atchley, Browns honored for selfless service
Main Content
Features Academic News Alumni News Campus News ACU Online All Categories
Academic News ACU News ACU Online ACU Remembers Alumni News Campus News Faculty Spotlights Features Graduate Programs Research Sports Student Experience Student Spotlights Student Success Undergraduate Programs Why ACU?
Laughter and tears were shared Sunday afternoon when Abilene Christian University honored its most recent major alumni award winners in an Alumni Day Luncheon in the Teague Special Events Center.
Rick Atchley (’78), minister of the Word at The Hills Church of Christ in the Fort Worth area, was honored as the 2014 Outstanding Alumnus of the Year, while the Young Alumnus of the Year award went for the first time to a couple, Randy Brown, M.D. (’94) and his wife, Anda (Adams ’95).
“You guys make us sound really good,” Randy Brown told a crowd of more than 400 people in the McCaleb Conference Center of ACU’s Teague Special Events Center. “I want to meet us, actually.”
The Browns minister in the low-income Como neighborhood of Fort Worth – mentoring, tutoring and loving children and teens in an environment beset by gangs and drugs. Read more about their story.
Among the speakers paying tribute to the Browns’ service was Corey Boone, a high school senior whom Randy Brown had mentored – and who will enter ACU as a freshman in Fall 2014. Boone stood on stage, flanked by two others of what are known as “Dr. Brown’s Mighty Men.”
“He [Randy] saw something in me and the rest of my brothers that we didn’t see in ourselves at the time,” Boone said, stopping to collect himself before addressing the Browns directly. “I am one of many people y’all have touched. Thank you for the opportunity you have given me to be a mighty man of God.”
Randy Brown returned the favor, telling Boone from the stage, “We do lots of ministry, but you guys aren’t ministry. You guys are family.”
The Browns grew up together in Midland and became a couple while they were students at ACU, he studying to go into medical school and she majoring in English education. In 2006, after earning a medical degree and opening a family medicine practice, they moved to Como, trading in a life focused on the American dream for one focused on following Jesus’ call to serve the needy.
“Anything good that comes out of our lives is all Jesus,” Anda Brown said. “We’re thankful to ACU because this is a place where we learned to passionately follow Jesus.”
Likewise, Atchley – who preached for Southern Hills Church of Christ in Abilene for 11 years upon graduating from ACU, then moved to Richland Hills Church of Christ 25 years ago – was praised for his devotion both to his congregants and his God. Read more about his story.
“He is privately what he asks all of us to be from the pulpit,” said Chris Hatchett (’88), minister of the The Hills’ Southlake campus. 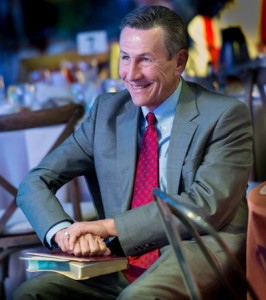 Atchley deflected the praise, pointing out that hundreds, if not thousands, of ministers have graduated from ACU.
“Many of them do it every bit as faithfully and steadfastly as I do,” he said. “In many ways, I stand here for them.”
The biggest laugh of the afternoon came courtesy of a pre-recorded message from Atchley’s ACU roommate, Max Lucado (’78), the best-selling author and San Antonio minister who was himself Outstanding Alumnus of the Year in 2004. Lucado congratulated Atchley for his success in the field of anesthesiology, before correcting himself. “Anesthesiology, theology,” he quipped. “They both put people to sleep!”
“Seriously, Rick,” he continued. “You’ve been a great friend. You’ve done so much for so many, inspired millions of us with your example, with your written word and with your spoken word.”
Atchley grew up in racially divided 1970s-era Dallas, and the experience molded his mission in the subsequent decades. He has spent decades seeking reconciliation – among races, faith traditions and congregations – and preaching the unifying grace of Christ.
“One of Rick’s greatest gifts [is] helping to focus people’s eyes on Jesus,” said Chris Seidman (’92), senior minister at The Branch in Dallas. “Rick’s focus on Jesus is tied to this university’s influence on him.”
PREVIOUS POST   NEXT POST
SHARE: