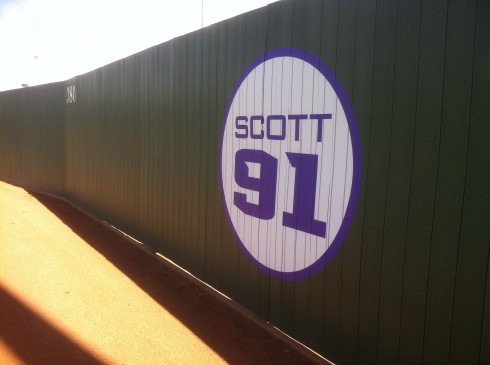 You can tell it’s spring again – or at least it’s not far away – by the sound of baseball at Crutcher Scott Field at Abilene Christian University. ACU wraps up its season-opening series with Arlington Baptist College this afternoon with a game at 1 p.m.
A familiar voice is missing, however, but not reminders of one of the Wildcats’ most loyal benefactors.
Altus “Al” Victor Scott (’61) died Oct. 6, 2013, at age 75 after years of supporting the ACU baseball program. Scott Field bears the name of his late father, Crutcher (’24), a former ACU trustee. Fans who visit the Wildcat ball yard this spring will now have a reminder of Al’s influence, as well. New graphics on the fence in left-center field bear the Scott name and the number 91 – not Al’s uniform number but the year (1991) that intercollegiate baseball returned to campus after an absence of more than a decade.
ACU has yet to retire a uniform number in its baseball program, but 91 is one they will never issue to a student-athlete. In a few weeks, graphics also will be added to the fence to thank former Texas Rangers’ icon Nolan Ryan for his role in making Scott Field a reality.
But in the meantime, Al’s role in the resurgence of Wildcat baseball can be seen on the fence and on the back of the team’s batting practice jerseys, which feature the same number as a reminder of an enduring legacy on the Hill.