Perhaps it was the presence of an ESPN crew, broadcasting games from Moody Coliseum to a nationwide audience Jan. 25 for the first time ever. Maybe it was the Chapel credit for attending. It could just be a new-found, long-overdue interest once more in basketball.

Whether one or all three, the re-emergence of students sitting (or standing, actually) in Section F at men’s and women’s basketball games at ACU is a welcome sight for coaches and players, and a pain in the neck for opponents.

ACU roundball is making a resurgence on the Hill, and that has a lot to do with it. Women’s head coach Julie Goodenough and men’s head coach Joe Golding (’99) have teams that are competitive every game. Their teams have turned in upsets (women’s basketball vs. Texas Tech) or near-upsets (men’s basketball vs. TCU) and the talent on the floor each game has made watching games fun again for Wildcat fans. Goodenough and Golding have coaching experience for other NCAA Division I programs and know well the effect a Game Day crowd, led by an enthusiastic student section, can have on opponents, and sometimes, the outcome of a game.

“The energy students bring to the game is contagious,” Golding said. “It makes our players realize they are playing for more than just themselves, they are playing for their university and the student body. It changes everything inside Moody Coliseum and makes it difficult for our opponent.”

Most universities have sections of inspired students who act out (or up, at times). Golding and his team team saw that earlier this season with the Wolf Pack at St. Bonaventure University in New York, in particular.

Duke University is the acknowledged originator of such behavior. Cameron Indoor Stadium is the home of the Cameron Crazies, who camp outside for days to acquire a ticket to the 1,200-seat section near the court where they cheer with abandon their beloved Blue Devils. Crazies invented the derisive cheer of “Air Ball, Air Ball” in 1975 to serenade an opponent whose shot attempt hits neither backboard, rim nor net. Head coach Mike Krzyzewski has to remind his faithful to “Stay Classy” each year, as he deplores profanity, but the clever students find ways to circumvent some strict guidelines laid down by the university and still get their humor – and point – across.

Along with inventing the “Air Ball” chant, there have been countless memorable moments from the Crazies. UNC guard Jeff Hale, who had suffered from a collapsed lung, heard “In-Hale, Ex-Hale” all game and when Roy Williams made his debut as UNC’s coach at Cameron in 2004, many students dressed as characters from The Wizard of Oz and set up a makeshift yellow brick road outside the opponent locker room to let Williams know he wasn’t in Kansas anymore. ESPN.com’s Page 2 staff compiled a top 10 list of Crazies’ exploits in 2002 that include the Hale chants among others including yelling “Urkel, Urkel,” as a skinny Lehigh player with knee-high socks and goggles went to the free throw line. Shaquille O’Neal was a target of several chants on his visit to Cameron [Alternating “Shaq can’t dunk” and “Boomshaqalackalacka”] and even Grant Hill’s parents weren’t above the cheers when the Crazies begged them to have “One more kid.”  Other than those in trouble with the law, another favorite target of the Crazies are the shorter players on other teams.  The “Webster” chants have been yelled at several players and likely started with 5-3 Muggsy Bouges from Wake Forest.  A 5-7 player from the Australian National Team during an exhibition contest heard “Shrimp on the Barbee” chants.

“Duke’s crowd may or may not be the best student section,” writes Blue Devils’ sportwriter Al Featherston, “but it is the standard by which all others are measured.” 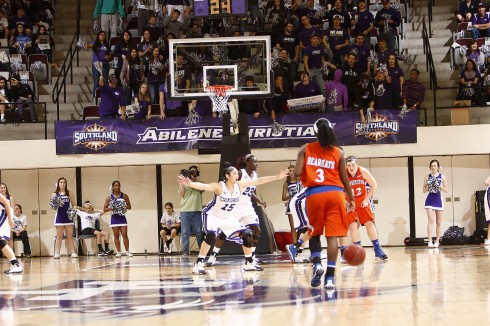 Section F thrived during the era of Wildcat men’s basketball when Mike Martin was head coach. From 1984-85 to 1987-88, the Wildcats averaged nearly 19 wins a season, won three Lone Star Conference titles, made two NCAA regional tournament appearances, and won 44 consecutive home games. Section F expanded to Sections E and G as well, as students made life miserable for opponents, and they always seemed to save their best for longtime nemesis West Texas A&M.

A capacity crowd of 4,300 watched ACU beat the Buffs on Feb. 28, 1987, for their third straight LSC championship, and even ACU president Dr. William J. Teague (’52) got in the act, leading Section F cheers at halftime. The fans chanted “Taco Bell, Taco Bell,” to taunt the maroon-and-yellow-clad Buffs whose warmup suits and uniforms were reminiscent of the Mexican food eatery’s wait-staff. WTA&M head coaches Gary Moss and Mark Adams were targets of Section F’s heckling, as were their players.

The antics were all in fun, and sometimes they strayed a bit too far for the dean of students’ comfort or general civility, but Section F’s brand of unique enthusiasm was contagious.

Sophomore Bryan Maier, a mathematics-teaching major from St. Louis, Mo., brings a lot of hard work and energy to organizing the cheering section. Student volunteers set an Optimist on the back of each chair back for use during the introduction of the opponent’s starting lineup (“Who’s he?” they scream in unison between pretending to read the student newspaper); distribute posters, pompoms and T-shirts; organize cheers; and clean up afterward. Maier said the posters alone can take up to three hours to prepare before each home game, which they promote through social media and word of mouth.

“We want Moody to be the hardest place for opposing teams to win in the Southland Conference,” said Maier. Section F organizers do not tolerate profanity or sexist or racist comments, but Maier said one of their goals is to have fun and still get under the skin of opposing teams. “We get lots of compliments from our men’s and women’s teams – players and coaches – and everybody has been appreciative of the support we’re trying to provide.”

“Seeing the revival of Section F and the increase in student interest at basketball games is a great boost to our programs and the atmosphere we want for Game Day,” said ACU athletics director Jared Mosley (’00). “I’m grateful to the student leadership and to the Students’ Association and Rodney Johnson (junior finance major from Odessa, Texas, and SA executive vice president) for their support of and hard work to help engage our student body. There are so many organizations on campus and partnerships with other departments throughout the year that have made this a true team effort. Having a home-court advantage through excited fans is a huge encouragement to the young men and women representing ACU.”

Section F is not yet ready to be mistaken for Duke’s legendary student section, but their energy is a welcome sight and sound in Moody once again.