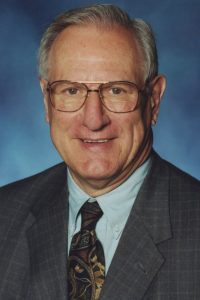 Dr. Roger D. Gee (’53), who had two distinguished careers in education – in public schools and at Abilene Christian University – died Jan. 26, 2014, in Abilene at age 81.
A memorial service will be held at 10:30 a.m. today in Abilene at Hillcrest Church of Christ, with a private burial afterward at Texas State Veterans Cemetery.
Born March 16, 1932, in Cromwell, Okla., he worked in the oilfield to finance his college education. He graduated from ACU with a bachelor’s degree in music education, having served in the student senate and as president of the A Cappella Chorus. Gee earned two graduate degrees in educational administration (a master’s in 1957 and an Ed.D. in 1964) from George Peabody College for Teachers, now part of Vanderbilt University. He served in the Army from 1954-56 and married Donna Huffman (’54) in Odessa, Texas, on Sept. 5, 1962.
Gee retired after 30 years of public school teaching and administration in the Sinton ISD (1953-54), Snyder ISD (1957-63), Wharton ISD (1964-66) and Victoria ISD (1966-85). He was a deputy superintendent in Wharton and a superintendent in Victoria, and served in several leadership roles in the Texas Association of School Administrators and the Texas Education Agency. In 1978, Gee was presented with ACU’s Grover C. Morlan Medal for outstanding teaching and leadership in education.
He returned to ACU in 1985 as associate professor of teacher education, serving on the Graduate Council, chairing the Core Curriculum Committee and coordinating the Education Visiting Committee. Before retiring from Abilene Christian, he was interim chair of the Department of Teacher Education, interim dean of the Graduate School, and graduate advisor for education.
Gee served as an elder for three congregations: Downtown Church of Christ and Central Church of Christ in Victoria, and Abilene’s Hillcrest Church of Christ.
Among survivors are his wife, Donna; two sons, Greg Gee (’90) and Paul Gee (’82); a daughter, Donna Beth (Gee ’85) Petri; five grandchildren; one great-grandchild; and a brother, Frank Gee.