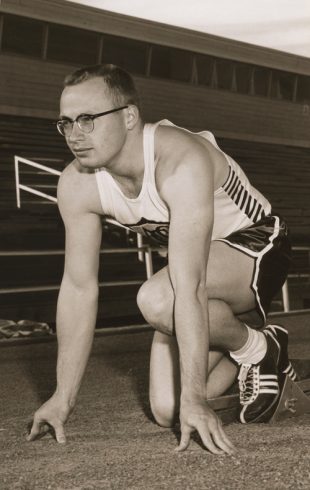 Bobby Morrow (’58) has deservedly received accolades too numerous to count for his performances on the track at Abilene Christian University in the 1950s. But he ran with other talented Wildcats on the multiple world record relay teams that made headlines. One of them was Bill Woodhouse (’59), who died yesterday at age 77 in Corpus Christi, Texas.

At 5-8 and 155 pounds, Woodhouse was an atypical physical specimen, as his head coach, Oliver Jackson (’42) described in 1959 in a Fort Worth Star-Telegram story:

“If I was going to shoot a sprinter, Bill Woodhouse would be the last man in the crowd I’d aim at. He looks like a running guard on a Class B single-wing team – short and squatty – and anything but the way you would picture a sprinter. As a matter of fact, I took him sight unseen upon the recommendation of Drake (University) track coach Tommy Deckard, and when he got off that train I said to myself that if he ever ran as fast as 10.2 I’d be surprised.”

But surprise he did, becoming the eighth sprinter to run 9.3 in the 100-yard dash and tie a world record – joining others from Oregon, Southern California, Northwestern, California, Duke, San Jose State and ACU (Morrow) – when he recorded that time at a meet in Abilene on May 5, 1959.