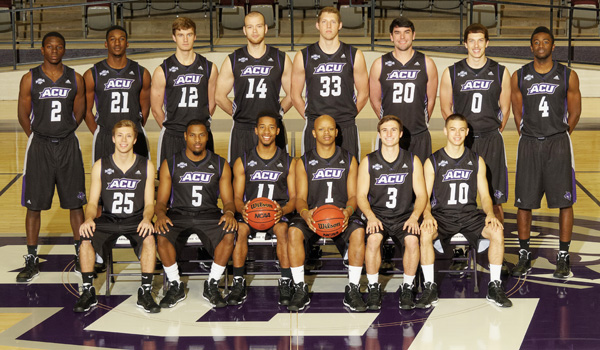 For 22 days in November, Abilene Christian University’s introduction to the world of NCAA Division I men’s basketball will feel like a full-court press unlike anything the Wildcats have ever faced.
Beginning with a game tomorrow afternoon in Pittsburgh with Duquesne University and ending Nov. 30 in Baltimore against either The Citadel or Towson State University, ACU will hit the road to face traditional powerhouse teams from the Big Ten, Atlantic Coast, Big East, Big 12, Atlantic 10, and several mid-major conferences.

Duquesne University made its name in the collegiate basketball world in the 1940s and 1950s, and is the only college team to produce back-to-back NBA overall No. 1 draft picks (1955 and 1956). The Dukes have produced the most Atlantic 10 Conference season scoring leaders in history. They play in the 4,406-seat Palumbo Center.
St. Bonaventure University, south of Buffalo, N.Y., made the 2012 national tournament and plays its games in the 6,012-seat Reilly Center, where Bob Lanier Court honors the Naismith Memorial Basketball Hall of Famer who led the Bonnies to the 1970 Final Four. SBU, a member of the Atlantic 10 conference, won the National Invitational Tournament (NIT) in 1977.
The University of Maryland won the national championship in 2002 and has a rich history in the sport: 24 appearances in the national tournament, 13 Sweet Sixteens, five Elite Eights and two Final Fours. They play in the 17,950-seat Comcast Center that features a 4,000-seat student section called the Wall. Legendary Terrapin head coaches have included Lefty Driesell and Gary Williams, and have tutored first-team all-Americans such as John Lucas, Len Bias and Albert King.
The University of Iowa plays in 15,450-seat Carver-Hawkeye Arena and has won eight Big Ten Conference titles and made 23 national tournament appearances. The Hawkeyes were NIT runner-up last season. Prominent head coaches who have served in Iowa City have included Ralph Miller, George Raveling, Tom Davis and Steve Alford.
Xavier University shares its basketball-mad hometown with the University of Cincinnati but is expected to be a new beast in the Big East, a conference it joins in 2013, having advanced to the postseason 24 times in the last 28 years, including 20 appearances in the NCAA tournament. The Big East includes traditional basketball powers Seton Hall, Georgetown, Butler, DePaul, Marquette, Providence, St. John’s and Villanova. The Musketeers have made the Sweet Sixteen three times in the last four seasons, and the Elite Eight two other years (2004 and 2008). They play in the 10,250-seat Cintus Center and their game with ACU will be broadcast nationally on Fox Sports 1.
TCU may be the only team in the rugged Big 12 Conference not favored to compete for the title in 2013-14, but annually features some of the top talent in the Southwest. The Horned Frogs will host ACU in 7,200-seat Daniel-Meyer Coliseum.
The Citadel (Charleston, S.C.) Bulldogs play in the Southern Conference. Towson University of the Colonial Athletics Association has made two national tournament appearances. And the new head coach this season for NCAA Division II-member West Alabama is Mark Downey, whose last three teams teams at the University of Charleston were 60-28 and made their first NCAA national tournament. His overall record is 184-92, averaging more than 20 wins a year across nine seasons.
Two of ACU’s Southland Conference games next semester will be broadcast on ESPN3.com: Jan. 25 at 3 p.m. against Sam Houston State University from Moody Coliseum in Abilene and Feb. 13 at 8 p.m. against University of the Incarnate Word in San Antonio. The Wildcats begin a full Southland schedule Jan. 9 on the road at the University of New Orleans.
ACU’s five televised games are part of a Southland Conference men’s basketball schedule that includes 43 national, 15 regional and another five broadcasts in syndication. Southland men’s teams will play 20 games on ESPN3 and 11 games on Fox College Sports. League teams also will make national appearances on Fox Sports 1, Fox Sports 2, the Big Ten Network, Pacific-12 Networks and the Longhorn Network.