Home/ ACU News/ Academic News/ Madagascar presidential elections offer hope
Main Content
Features Academic News Alumni News Campus News ACU Online All Categories
Academic News ACU News ACU Online ACU Remembers Alumni News Campus News Faculty Spotlights Features Graduate Programs Research Sports Student Experience Student Spotlights Student Success Undergraduate Programs Why ACU?
A lot has transpired on the island nation of Madagascar since 2008. That’s when 24 students in the Madagascar Presidential Scholars Program graduated from Abilene Christian University, anticipating roles in the government Marc Ravalomanana had formed in 2002 to lead their homeland to brighter days, or to use his considerable influence to secure careers in the private sector.
Ravalomanana and his presidential delegation had visited ACU twice between 2004 and 2008, and officials from the university traveled to the capital city of Antananarivo that July to conduct what may have been the first Abilene Christian Commencement ceremony on foreign soil. Nearly 700 friends, family, government officials and media attended the event, which was televised live nationally and across Africa.
The nation was one year into Ravalomanana’s aggressive Madagascar Action Plan, a five-year strategic initiative to strengthen infrastructure, increase tourism, stop deforestation and other environmental threats, and grow the economy. The World Bank had helped finance Ravalomanana’s Madagascar Presidential Scholars Program because of the promise two dozen of the nation’s top students might bring home with them in a creative nation-building enterprise.
Political opponents, meanwhile, were both frustrated and empowered by the struggling economy, as most Malagasy live on less than US $2 a day.
Less than a year later, after the government shut down some media outlets owned by opponents, rioting began that eventually resulted in 19 civilian deaths. A military coup led by Andry Rajoelina, the outspoken young former mayor of Antananarivo, toppled Ravalomanana in March 2009 and forced him and his family to flee the country. Troops and rioters looted the palace where the president once allowed the ACU delegation a rare tour and entertained them and the new graduates with a state dinner. However, Rajoelina – who at 34 was too young to qualify as an officially elected presidential candidate – saw the energy of his social uprising quickly diminish.
The already-poor nation was plunged into further economic crisis as the United Nations and African Union refused to recognize the transitional government. Foreign aid was suspended and the tourism industry on which Madagascar depends heavily screeched to a halt.
While the ACU graduates had the education they needed to make significant contributions to their homeland, the jobs and career influence promised by Ravalomanana largely disappeared after the coup. Today, a handful of the 24 have settled in the U.S. Several have earned master’s and doctoral degrees and are teaching at American universities. Others are forging careers back home with a rare college education from a private university in the U.S.
After five years of bickering and legal challenges, presidential elections finally took place Oct. 27.
Rajoelina and former Marxist president Didier Ratsiraka, along with Ravalomanana and his wife, Lalao, were not among the candidates. Voting results are still trickling in from across the country, and if none of the 33 official candidates receives more than 50 percent of the votes cast, a second round of elections will be held Dec. 20 between the two top finishers.
Ravalomanana, who was presented an Honorary Doctor of Laws degree from ACU when he was Commencement speaker in May 2008, currently lives in exile in South Africa, according to the BBC. Malagasy are hopeful the democratic elections will bring a restoration of international aid, an increase in foreign investments, and a return of the promise to which his nation of 22 million people aspires.

I was part of the ACU contingent that went to Antananarivo in July 2008. The morning after Commencement, we traveled outside the capital city to attend worship services at the Church of Jesus Christ in Madagascar with Ravalomanana, his wife and several government officials. My post on this blog described the scene: 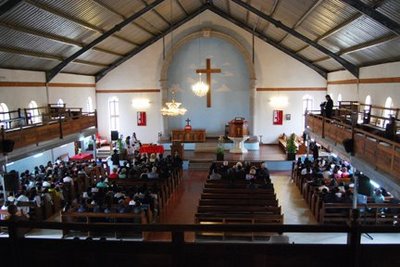 “An hour after leaving the hotel, we arrive at the red-brick church building atop a mountain offering spectacular views of the countryside. The narrow road up the mountain has new blacktop, hairpin turns and no guardrails for our going-too-fast-for-comfort motorcade. The quaint house of worship is known as ‘the president’s church’ in part because nestled around it are the tall, humble houses composing a tiny village where Ravalomanana was born and still considers home even though he lives in a presidential palace. In fact, he is building a massive house at the mountain’s peak where he plans to live one day. The church is charming – old-world in architecture, a modern sound system inside, and two massive wooden doors opened to the vista below. About 200 people are present and clearly waiting our arrival. They look curiously at the American visitors. Adults nod at us, and shy children wave small fingers and smile when we wave at them first. The service is conducted in Malagasy, and contains hymns with which we are familiar (‘Guide Me O Thou Great Jehovah,’ ‘Master the Tempest is Raging’ and ‘Brightly Beams Our Father’s Mercy’). Students sitting next to the group quietly interpret the prayers and readings and sermon for several of us. The minister speaks passionately about the importance of serving others, linking passages read earlier from Luke 22 (‘Who is greatest in the kingdom, one who sits at table or one who serves?’) and Acts 7.”

After church, we walked dirt pathways between houses on the hilltop, then sped away for a tour of the Iavoloha Palace, the president’s official residence. Once there, Ravalomanana shooed away nervous-looking guards – one said, “This is unprecedented” – and escorted us to several large rooms, one of which was his office. It was not hard to notice two well-worn Bibles on his desk, and I recalled what he said two months earlier at Commencement while describing his expectations of the graduates in the audience:

“We need leaders who are willing to serve others before themselves. We need men and women of integrity who will do what is right. We need people who take initiative, who are willing to tackle difficult issues and discover solutions. In fact, what we need in Madagascar is the same as what you need in America and what every nation needs. We need Christian servant-leaders, and we need them now.”

No words are more true today of his country, and ours.