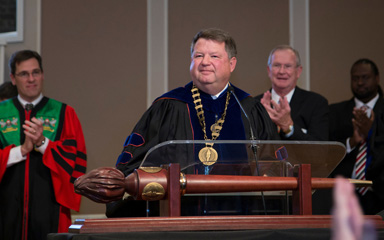 Presidential inaugurations, especially for colleges and universities, are mostly solemn events.
Former ACU development vice president Dr. John Tyson (’81) became Rochester (Mich.) College’s ninth president Oct. 10 in ceremonies at the Rochester Church of Christ. ACU chancellor Dr. Royce Money (’64) was one of the guest speakers. Tyson is the fourth Abilene Christian graduate selected as president of Rochester College.
All the traditional pomp and circumstance took place, but Rochester mayor Bryan Barnett added a little comedy to the event in his remarks as a guest speaker, including the “Top 10 Reasons Michigan is Cooler than Texas” so Tyson, a native of San Angelo, would appreciate a Michigander’s perspective on the differences between the two states:

10 – Like always, the Detroit Lions have a better record than both the Dallas Cowboys and Houston Texans.
9 – Our international border up here is much easier to cross than yours in Texas.
8 – Texas has the Big Ranch Steakhouse, home of the 72-ounce steak dinner. We have Lipuma’s Coney Island. So for the first time ever, Lipuma’s is actually the healthier choice.
7 – Our storms don’t have names.
6 – Michigan is home to some of the best musicians and rock stars of all times … from the Supremes, the Temptations, Bob Seger, Madonna, Kid Rock and Eminem. Texas … Texas has given us Vanilla Ice and Barney.
5 – Texas is known for oil. Michigan is known for cherry pies, blueberry cobbler and Mackinac Island Fudge. Dr. Tyson, I ask you, which would you rather have for dessert?
4 – This year Texas celebrated the 500th death row execution … exactly 500 more than Michigan. So on the positive side, your chance of being executed for a crime you commit is greatly diminished here in Michigan.
3 – In Texas, and this is true since I looked it up on Wikipedia, it is illegal to have unusual haircuts. True fact. In Michigan, president Tyson, your haircut is completely acceptable.
2 – Michigan is home to Henry Ford, Thomas Edison, and Charles Lindbergh. Texas is home to Bonnie and Clyde, and now, the Kwame Kilpatrick family (Former Detroit mayor Kilpatrick, who moved to the north Dallas city of Southlake, was recently sentenced to 28 years in prison for racketeering, conspiracy, bribery, extortion and fraud).
1 – The Detroit Tigers are playing October playoff baseball while the Texas Rangers are vacationing on a fall color trip here in Michigan. [The Tigers have since lost in the American League Championship Series]

Tyson earned bachelor’s and master’s degrees from ACU, and a doctorate from The University of Texas at Austin. He succeeds Dr. Rubel Shelly, who was serving a joint appointment as professor of theology and religion.
Watch the upcoming Fall-Winter 2013 issue of ACU Today for more about Tyson’s new role and the Michigan college’s trend of choosing ACU grads to lead it.