Students at Cooper High School in Abilene let out a “roar” that has been heard across the nation, and Deborah (Talley ’09) Kirby, a graduate of Abilene Christian University’s Department of Teacher Education, was roaring right along with them.
The students created a video that was named one of five finalists in a “Good Morning America” Katy Perry contest. To enter the contest, students were asked to film their own rendition of the pop star’s hit song “Roar.” 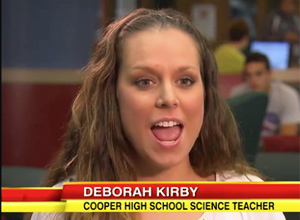 The Cooper students chose to focus on those without a voice. In the video, they display cardboard signs, some of which read: “I am different”; “I am not like them”; “I am a freak”; “I am too fat”; “I will never be successful”; and “I should kill myself.”
Kirby, a science teacher and varsity cheerleading coach, helped with the concept and served as director of the student-produced video.
“I’ve always thought how much fun it would be to make a music video,” Kirby said. “I mean, let’s be honest, who hasn’t dreamt of getting to dance and sing down high school corridors? So when one of my cheerleaders heard about the Katy Perry contest, she knew I would totally be on board, and that it was a chance we couldn’t pass up.”
The students wanted to focus on those who are normally left out – the unpopular, and those who have overcome the greatest struggles, Kirby said.
“I had all of my classes write down something negative that they had been told at some point in their life by a friend, a parent, a teacher, anyone, or even just something negative they felt about themselves. It was absolutely heartbreaking to read their words, and I still have all those pages they wrote. I keep them with me as a reminder.”
The students then wrote the negative messages on poster boards to display to the world.
“The idea was to not allow those messages to define who they were,” Kirby said. “I did nothing but help direct these talented young students as they put together a beautiful message for all of us.”
The GMA crew revealed Cooper High’s video Oct. 10 during a live broadcast from the school gym, amidst a red, white and blue sea of cheering students, teachers and staff.
Perry, who selected the five finalists out of hundreds of entries across the country, will choose the winner to be announced Oct. 18 and will perform a free concert for the winning school on Oct. 25.