Abilene Christian University students chipped in to buy groundskeeper Jim S. “Sheriff” Burgess a suit of clothes for his 80th birthday in 1956. When he retired in 1960 at age 84, they gave him a rocking chair, a hat and a double-barrel shotgun.

The Sheriff was that beloved on campus, having planted trees and nurtured flowerbeds, served as nightwatchman and endeared himself to everyone along the way. He worked at ACU from 1934-60, and died in Comanche, Texas, in 1970 at age 93.

Burgess was known for his forward-thinking and innovation, using explosives to loosen hard-pan dirt from the front of the Hardin Administration Building so holes could be dug to plant each seedling pecan, live oak and sycamore tree that now towers over the lawn below. With the help of a handful of students, he did his hardest work during the worst drought in Texas history. He persevered through the Dust Bowl days of the 1930s and dry years in the 1950s when rain was as scarce as snow in July.

Today, a team of 21 professionals – groundskeepers, landscape gardeners, irrigation technicians, sports field groundskeepers, chemical applicators, mechanics and supervisory personnel – is needed to keep up with the 250 acres on ACU’s main campus. Their easily noticed as well as behind-the-scenes handiwork has resulted in an environment that wows visitors and often helps the Admissions Office secure an enrollment commitment with prospective students.

“Ninety-one percent of students say, ‘It just feels right,’ when they initially visit the university at which they eventually choose to enroll,” said Kevin Campbell (’00), ACU’s chief enrollment office. “A big part of that impression relates to campus aesthetics. On their visits to ACU, students and families consistently tell us how beautiful and green our campus is. They love the seasonal flowers at the main entrance, the open spaces and the knockout roses they see as they make their way toward the Hunter Welcome Center. Our landscaping team has done a tremendous job in creating and maintaining a beautiful environment for people to enjoy.” 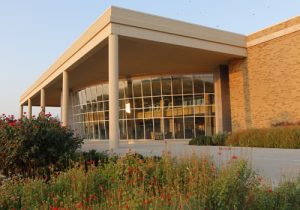 An additional 90 acres of grass are mowed each week on nearby ACU properties, and some of the athletics venues require daily mowing during the growing season. Three full-time employees oversee the irrigation system, which includes 9,000 sprinkler heads across 150 acres of turf and landscape that are watered regularly.

This outdoors work is not for the faint of heart, given the 1,900 trees, 6.5 acres of flower beds and 34 linear miles of pavement to edge. In all, it’s a considerably different campus than the one Burgess left in 1960, when he estimated there were 160 trees on the property. 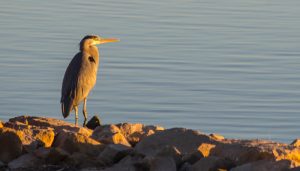 “Effluent water is the lifeblood of our landscape and probably the most sustainable thing we do at ACU,” said Scott Warren, director of landscape and grounds. “The campus is irrigated from Faubus Fountain Lake, which is filled with effluent water and groundwater pumped from the basement of several of our buildings, in addition to runoff from rain when it falls. The use of reclaimed water excludes us from Abilene’s mandated water rationing, although we still are committed to being good stewards of the water we have.”

Warren said Burgess was instrumental in the way the older part of campus looks and feels today. “We have continued his thought of using native and/or adaptive species,” he said. “Sheriff started using native trees such as pecan and live oak, and we have continued that philosophy in our newer landscapes by incorporating xeric plant material into our designs.” 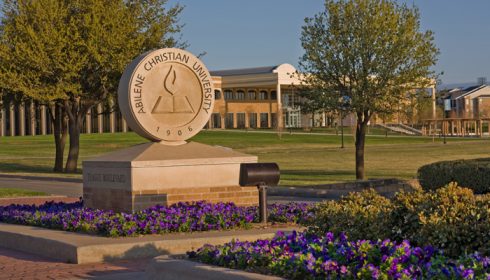 Warren’s crew has increased the use of colorful perennials, unique hardscapes and specialty spaces, including a butterfly garden on the east side of the Hunter Welcome Center. They use organic compost and mulch, including material from tree trimmings from the campus and the City of Abilene. They plant 4,000 flowers each spring, and have reduced that number by 20 percent from previous years by adding perennials to the landscape.

Some of the oldest trees on campus are under stress from a prolonged drought in West Texas, requiring close inspection and constant care. The drought of 2011 was particularly hard on trees and turf grasses.

“Working in the extreme climatic conditions of West Texas is physically demanding for our staff,” Warren said, “But we are blessed to work where we constantly receive encouraging feedback about how beautiful the campus is. It’s rewarding for our staff to have the fruits of their labor noticed by the ACU community, to know we are part of the ACU mission. If we can help attract and retain students to campus, as well as encourage them to use the landscape as a place for developing community, we have done our job.”