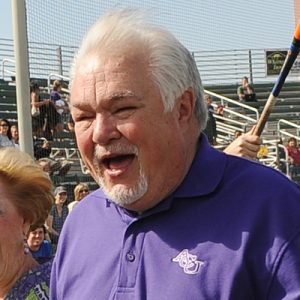 Abilene Christian University baseball benefactor Altus “Al” Victor Scott (’61) died Oct. 6 at age 75 in Abilene.
His memorial service will be held 2 p.m. Thursday at University Church of Christ with Dr. Gary McCaleb officiating. Burial is at Elmwood Memorial Park following the service. A visitation will be held tonight from 5-7 p.m. at Piersall-Benton Funeral Directors (733 Butternut St.) in Abilene.
Born in Fort Worth to Altus Crutcher Scott (’24) and Victoria “Vickie” (Stone) Scott, he was a pitcher for Abilene High School and ACU. His love for baseball permeated his life and influenced his tireless work to help his alma mater restart its intercollegiate program in 1991 with the construction of Crutcher Scott Field, named after his father, a former trustee of Abilene Christian for more than four decades. Crutcher and Vickie were inducted posthumously in 1994 to the ACU Sports Hall of Fame.
Through the years, Scott held leadership roles with Rotary, the Abilene Zoological Society, Abilene Civic Ballet Co., St. John’s Elementary School, and the Grover Nelson Zoological Foundation. He also coached Little League baseball and performed with the Abilene Community Theatre.


On numerous occasions Scott served as a primary and state delegate for the Taylor County Republican Party, and during the 1980s, he and his late wife, Dottie, were chosen to be national delegates for President Ronald Reagan.
Among survivors are his wife, Judy Carson Scott; daughters Sherri Scott (’96) and Susan (Scott ’98) Bennett; a son, Michael Scott; granddaughters Abigail “Abby” Scott and Victoria “Tori” Bennett; and a cousin, Jack Scott. He was preceded in death by his parents; his wife of 39 years, Dottie (Mize) Scott; and their daughter, Terri Scott.
In lieu of flowers, the family requests memorials be made to the Al and Dottie Scott Memorial Endowment, which provides scholarships for Wildcat baseball players. Mail memorial gifts to ACU Gift Records, ACU Box 29132, Abilene, Texas 79699-9132; call Gift Records at 325-674-2612 to make a gift by phone; or give online at acu.edu/giveonline.
PREVIOUS POST   NEXT POST
SHARE: