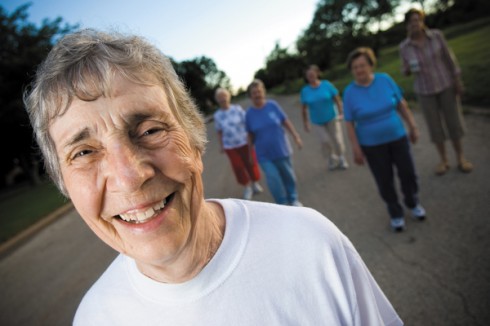 Phyllis Charlene Ricketts, retired veteran administrative coordinator in the Advancement Office at Abilene Christian University, died Tuesday morning in a Lubbock hospital from injuries following an automobile accident Monday in Abilene. She was 87.
Born Nov. 8, 1925, in Mora, Mo., she married William “Bill” Ricketts on July 7, 1945.
Charlene attended Central Missouri State University and ACU, and was a member of Abilene’s Hillcrest Church of Christ, where she taught Bible classes for pre-schoolers for nearly 30 years.
She was a member of Women for Abilene Christian University (serving twice as its historian), the Western Horizon Chapter of the American Business Women’s Association (serving at one point as president and vice president, and honored as its Woman of the Year in 1992), and Big Country Windrunners.
In ACU Today’s Fall 2007 issue, we briefly profiled her in “Graceful Giants,” a look at three prominent staff and administrators who were wrapping up lengthy, full-time careers at ACU:

“Administrative coordinator Charlene Ricketts typifies the legion of dedicated staff whose selfless behind-the-scenes work help make events and initiatives a success. She served 40 years as a secretary, 35 of them trying to keep pace with the boundless energy and whirlwind schedule of Dr. Robert D. Hunter (’52).
‘We get along because he talks a lot, and I don’t talk all that much, and so I listen, and I try to write down everything he asks me, and if I don’t get the answer back to him by the time I begin to think about it, he’s asked me two more questions,’ Ricketts once said with a sly smile about the rambunctious Hunter, who also recently ended a run of 10 terms as a Texas state representative. ‘It’s not been boring. There’s never a dull moment with Bob Hunter; he’s always doing something. He’s a wonderfully creative and caring person.’
She says she particularly enjoyed the 10 years when Hunter was president of the Independent Colleges and Universities of Texas. ‘That was really fun getting to know the people at the 40 ICUT schools,’ she said. A local legend as an amateur distance runner who began competing in 1981 at age 55, Ricketts ran in 5k and 10k events for 25 years, finishing first several times in her age bracket at Austin’s Capitol 10,000. Back surgery in 2005 converted her from a runner to a walker, and she is a fixture among footloose friends at 6 a.m. several mornings each week in the Hillcrest neighborhood near campus.”

Charlene began work at ACU in September 1967 as a campaign secretary in the Advancement Office. She became Hunter’s administrative coordinator in 1972 and retired in 2012.
A zealous organizer, she was known around campus for a library-like filing and records system that kept up with Hunter’s travels and penchant for writing notes and letters, and phoning countless alumni, business and political associates – a network of friends that would nearly make LinkedIn and Facebook pale in comparison. She also was an accomplished calligrapher, leaned on heavily for years by associates across campus for hand-addressed envelopes, and event place cards and nametags. Charlene’s patience was legendary and she was reticent to say a disparaging word about anyone. She was named one of ACU’s outstanding operating staff members in the early 1980s.
Charlene outlived her parents, Charles and Olga Schwensen Jr., and her husband, Bill. Survivors include two sons, Charles J. Ricketts (’75) and Robert W. Ricketts (’77); a daughter, Elizabeth (Ricketts ’71) Marcus; seven grandchildren; and 13 great-grandchildren.
There will be a visitation at 10 a.m. and a memorial service at 11 a.m. on Friday, Sept. 27, at Hillcrest Church of Christ.