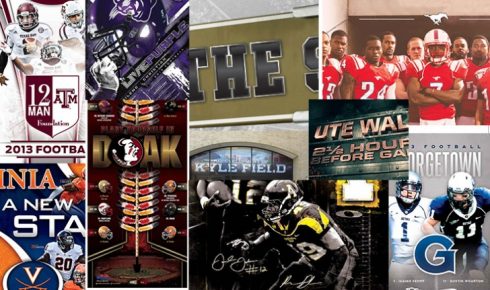 While the women’s soccer and volleyball teams are already out of the gate, the first game of Abilene Christian University’s new football era in NCAA Division I is Saturday night.
Head coach Ken Collum’s Wildcats play Concordia College of Selma, Ala., at 7 p.m. in Shotwell Stadium, broadcast locally on Sports Radio 98.1 FM The Ticket. Fans can listen free on The Ticket’s website. In and around the Dallas/Fort Worth metroplex, the game can be heard on KBXD 1480 AM, and fans can listen free on that station’s website as well. Online, the game is available to watch by subscription at Stretch Internet’s Game Central. LiveStats are available on the ACU athletics website. And see GameDay for a roundup of Saturday’s action, including the same downloadable Game Notes available to members of the media. 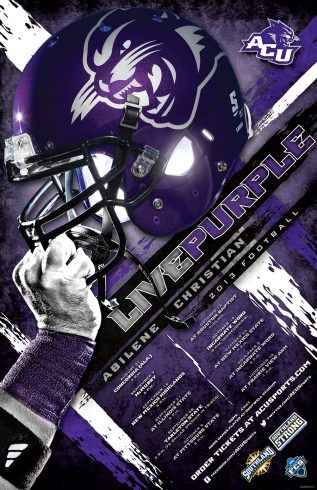 Old Hat Creative of Norman, Okla., did the graphic design for this season’s schedule posters, one of which is seen in the graphic above and is featured on its blog this week. Old Hat does athletics marketing work for some of college sports’ most successful programs, such as Texas A&M, Michigan and Florida State.
The poster features the same image seen on the Spring-Summer 2013 issue of ACU Today magazine, shot by freelance photographer Jeremy Enlow of Weatherford, Texas.
A similar design was applied to schedule posters for women’s volleyball and women’s soccer, and schedule cards. 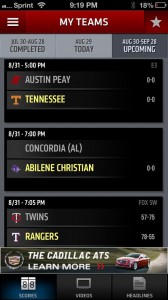 Grant Boone (’99), alumni relations officer and the radio voice of ACU sports, noted for his Facebook followers this week that Division I-era ACU scores can now appear on his iPhone with those of other major college teams, thanks to ESPN’s My Team feature. Give it a try.
Casey Wilson’s (99) soccer team won its first match this week in Oklahoma City University, 3-1, on the Stars’ home turf. The team plays its first home match today at 4 p.m. CST against the University of Texas-Brownsville.
Kellen (Morrow ’05) Mock’s volleyball team opens its season this weekend in Arlington at the UTA Hilton tournament with matches tonight at 7 p.m. with host Texas-Arlington and Saturday against Louisiana Tech (11 a.m.) and Grambling State University (4:30 p.m.).