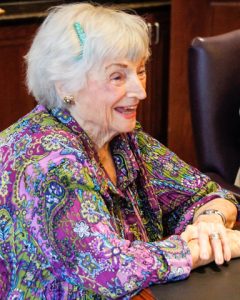 A familiar voice was heard late last week in the Hunter Welcome Center as Dewby (Adams ’50) Ray made a visit to campus for the first time since moving to Lubbock earlier this year.
Health issues for the Rays caused Dewby and her husband, Amos, to relocate near their daughter, Nan Ray (’79), but the move was hard on Dewby, who had called Abilene home and dreaded moving away from their many friends.
“They’re afraid to let me drive because they think I’ll head to Abilene and not come back,” she laughed while meeting – well, holding court is probably a better term – in the Garrett Conference Room with staff from the Advancement and Alumni Relations offices who received some wisdom passed down from one generation to another. They presented a framed certificate honoring Dewby’s service to ACU through the years.
Her roles at “the college,” as she refers to Abilene Christian, included serving as a transcript clerk in the Registrar’s Office, assistant to the alumni director, acting alumni director, campus hostess, and coordinator of alumni/parent programs. Dewby is founding president of Women for Abilene Christian University. She became a close associate of those of us in Creative Services while serving on the Centennial Photography Archivists Team from 2005-07, and continuing to volunteer in our office in recent years.
The Rays’ house was always a beehive of student activity. Over the years, 22 ACU students lived with Amos and Dewby, who resided near campus. In retirement, they lived in an apartment in Christian Village, just west of campus.
She met Amos while attending the University of Colorado at Boulder in Summer 1948, at a church picnic. Ten days after their marriage in 1952, he headed to Germany to serve in the U.S. Air Force.
“We live in Lubbock now, which also is a college town, but I am already tired of hearing about Texas Tech all the time,” said Dewby, who is never shy about expressing her feelings. She stays in the know about Abilene, thanks to newspapers and ACU Today magazine, and said she had plans to be present when the Wildcat volleyball team plays Texas Tech in Lubbock on Sept. 3.