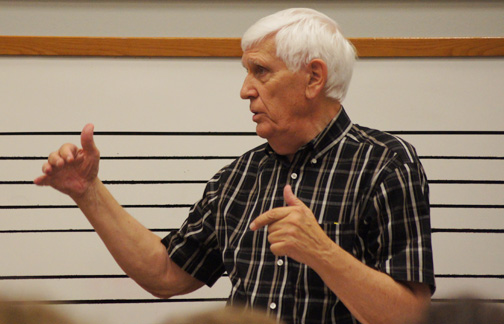 Dr. Jack Boyd (’55) estimates there are at least 30 people in Texas who share his name. But there is only one from Abilene Christian University who is a composer and arranger, humorist, hymnal editor (Great Songs of the Church, Revised), author (14 books, with more in the works), lecturer, respected choral conductor, and beloved professor emeritus of music.

This summer, you can add to that list a new title: conductor emeritus of the ACU Alumni Chorus, a loyal and hardy group of vocalists who gather every other year to record a music CD. Their next on-campus reunion will be their 13th overall, and takes place Aug. 2-3 in the Williams Performing Arts Center, where they will record I Am With You.
Registration for the event closes July 26, and can be done online.

Boyd says the group is a “Y’All Come chorus” that dates back to the 1960s, when it met at Homecoming.

“We’d work on four or five choral pieces we’d all sung back in the day, mostly when we sang in Dr. Leonard Burford’s chorus, and then we’d present a short concert,” Boyd says. “It turned out to be so much fun that several ex-A Cappella Chorus members got together in January 1989 and decided we needed to do something spectacular, like meet for two full days and record a CD of our favorite choral pieces. I sang in the A Cappella in the early 1950s, and conducted it in the 1970s. I sort of bridged the generations, so I was chosen as conductor.”

The group’s first recording was done in August 1989 at Dallas Sound Lab in Irving, Texas. Organizers expected about 80 participants but were astonished when more than 170 arrived. Alumni travel from across the U.S. to participate, even a few from overseas.

Linda Hagler (’78) serves as president of the ACU Alumni Chorus. The group contributes to an endowed scholarship fund for vocal music majors, and also passes the hat during reunions to provide operational funds for the university’s A Cappella Chorus. CDs are available online at the chorus website, and some songs and albums are available from the iTunes store.

Boyd is not shy about speaking his mind, so we asked him about the ACU Alumni Chorus, its biannual reunions and his perspectives on worship music:

That, and the memories awakened by singing with old friends. That first year we pretty much recorded what we liked, which means what we’d performed back in the 1950s, since that’s when most of the singers attended Abilene Christian. We recorded a few concert pieces such as Holy Radiant Light, Come Unto Me – by Dr. Leonard Burford (’25) – and some hymn arrangements. Over the years we’ve pretty much done it all, and everything has been without accompaniment with the sole exception of a cowboy song recorded with guitar.

In a word: noisy. It’s a big social event and the miracle is that the quality of the product is so good. Since we decided we’d already had our tryouts back when we got into A Cappella in the first place, we wouldn’t require anyone to try out again. All we asked was that he or she show up. That meant a remarkable mix of old and young and highly trained and merely enthusiastic. One man, a tenor, had been a member of the A Cappella in 1936, 53 years before!

Somebody asked how he sounded, and another tenor said, “We have no idea; his mouth moves, but we’ve never heard him.” We’ve always gathered on the Thursday night before the first weekend in August, and that Thursday meeting gets most (but not all) of the socializing out of the way. Everyone shows up determined to make a fine choral product. The singers are worked extraordinarily hard for about 13 hours of rehearsing and recording over Friday and Saturday. Of course, it’s the conductor’s job to make sure that there is never a gap in the singing, because the history of choral singing demands that every minute not spent singing should be spent talking to a neighbor, regardless of what the conductor is trying to explain.

I was the founding conductor of our 1989 Alumni Chorus, but at our last meeting we asked Dr. Gary Mabry (’73), a former member of the A Cappella, to take over as conductor. I became the conductor emeritus. This year Gary’s choices go under the title I Am With You, and will consist of concert arrangements of 12 or 13 hymns Gary chose that use old, established tunes but feature new words. Gary (who has been conducting us a bit for the past two alumni meetings) will rehearse and record nine or 10 of the chosen choral works, and I will conduct the other three. He and I have done most of the arranging, with a few commercial arrangements thrown in.

How do you compensate for the changes experienced by aging voices in the chorus?

That’s a good question. Since both Gary’s voice and my voice are showing the mileage, we understand the problem. Neither Gary nor I do anything to compensate for aging voices, and by “aging” we mean anyone older than 60. Because of the singers’ training back when we were attending ACC or ACU, they have been able to retain a remarkable amount of vocal ability. If a voice has a problem, that singer discovers it first and simply drops the volume a bit when we get into a dicey area. We expect every singer to work up to his or her absolute top ability. The singers make the call as to when they should become audience members and not choir members, and we have a few “watchers and holy ones” at every session. That said, both Gary and I have little signs to the singers to prop up and improve the sound, such as the one of mine that irritates the sopranos beyond all measure. This is when I wiggle my left hand back and forth to indicate that I hear more vibrato than I like; there’s a lot of soprano eye-rolling at that one.

Why does this event appeal to alumni of multiple generations?

Like Capistrano swallows, they just keep coming back. A lot of it is seeing old friends from back when they sang together. We don’t have a lot of singers from the most recent decades because, being in their 20s and 30s, most of them have families and jobs that keep them from attending our meetings. But what happens when they do come is that everybody talks to everybody, and the old heads like to meet those singers who come from the most recent decades. One thing I’ve noticed is that the young singers who attend suddenly realize they may have a full half-century of singing ahead of them, and some of that time can be spent singing with other Christian singers. It always surprises the attendees who have not been with us before to hear the quality of the recordings, and to see how hard everybody works. For two days we’re a family.

Are you riding off into the choral directors’ sunset, or just into a new role?

I’m sort of the resident “Lone Arranger,” as one singer described it. My background in composing and arranging lets me turn out choral works that can be learned quickly and recorded accurately. I suppose I’ll still conduct two or three works at each of the future meetings. Also, since I’m still here in Abilene I can take care of some of the housekeeping chores, such as getting music printed and making sure all of the physical arrangements are in place. But I’ve got to say I’m delighted to have a less stressful job. If Gary had any hair, now is when it would start turning gray.

What are some memorable moments from your career as a choral director at ACU?

Pretty much any of the tours. I took the A Cappella all over the map; we presented more than 250 total concerts in 46 states during my 11 years as conductor. I also took two groups to Europe. Marvelous memories. My least memorable memories concerned trying to decide what the womens’ dresses should look like. As I was reminded each year by female members of each chorus, a one-style-fits-all design or color will not suit every woman.

In your view, what is the state of a cappella music in Churches of Christ?

I’m biased, of course, but I think it’s grim. Our problem is that people who know nothing about worship or hymnody try to make decisions about the worship and hymnody. Elders without knowledge or experience in worship think hiring a young worship leader to teach new songs to the congregation will solve the exodus of young people leaving the church. It won’t. Too many religious songs are chosen because the worship leader likes the singer who originally recorded that song. Virtually all of the so-called “praise songs” were written for a soloist to sing with a band; the songs were not designed to be sung a cappella by a congregation. There is the occasional exception, such as Shout, Hallelujah, or Jesus, Let Us Come to Know You, but far too many of the new hymns are written against the congregation, not for the congregation. Until we understand that the kids don’t need a special hymnody but rather a congregation that loves and respects and utilizes them, we’re going to continue losing members, and our singing will continue to go over the cliff. As one young college student recently wrote, “I’m tired of everything being new; I want something I’ve heard before.” Usually it takes me three one-hour lectures to cover this problem.

What are your five favorite hymns to lead, and why?

Fifty years from now, when you’re organizing angel chorus rehearsals, what do you want people back here to remember most about you?

Both good and sorry choral directors come and go, and choral music manages to survive quite nicely. The Alumni Chorus’ 17 CDs will help a bit. What I’d really like would be for one of my grandkids or great-grandkids to hear a choral work or a hymn setting, and say “Hey, Papa wrote that!” It’s happened a couple of times with my arrangements of Shall We Gather at the River and Jesus, Keep Me Near the Cross. I’ve written only one hymn, which had a curious genesis (which I will not explain). It’s titled Child of Mine, Sing On. I’d like that to get a bit of air time. Email me at jackboyd@abilene.com and I’ll send a copy. But most of all, I’d like my congregation to remember that “Jack told us the Holy Spirit was neither tone deaf nor illiterate; he wouldn’t allow us to give shallow gifts back to the Lord.” That would be nice.