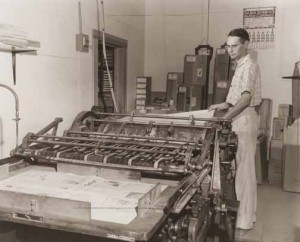 A hand-lettered poster by Dana Tanamachi in my house reflects I Thessalonians 4:11 and describes an admonition that seems to fit Irvin D. Hiler (’45) perfectly: “Live a quiet life and work with your hands.”
Hiler, whose hands touched nearly every publication and printed piece produced by Abilene Christian University for 41 years, died July 18, 2013, in Abilene, a week short of his 87th birthday. 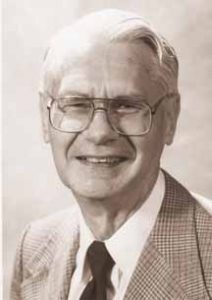 Born July 25, 1926, in San Antonio, he enrolled at ACU in 1942, and worked in the Print Shop for Homer Howk (’34) until his graduation in 1945 with a bachelor’s degree in mathematics. A year later, he became manager of that same Print Shop and three years later, wed Howk’s daughter, Alta Faye (’47), in Searcy, Ark. They were married 58 years until her death in 2007.
A university Print Shop such as ACU’s during Hiler’s tenure as director of graphics was an extraordinarily busy place. Brochures, tickets, flyers, booklets, invitations, posters, programs, media guides, catalogs – even student-produced publications such as the Optimist newspaper and Prickly Pear yearbook – were typeset, designed, printed and bound in unglamorous surroundings. For years, Hiler’s operation, later called Communication Services, was housed in an easy-to-overlook one-story brick building tucked between Chambers Hall and Bennett Gymnasium. His work spanned eras when words were set in lead on Linotype hot-metal typositors, to the university’s first computerized phototypesetting equipment that revolutionized the printing industry.
He was named the university’s outstanding staff member in 1974-75. Late in his career, he focused on publishing work for ACU Press and its director, the late James E. Fulbright (’47), preparing tens of thousands of pages of text for books and Bible commentaries. He retired in 1988.


When I was studying journalism at ACU in the late 1970s, Hiler was still typesetting the Optimist. His work hours had to parallel our often crazy student ones, as we delivered stacks of typewritten pages of text to Irv for rekeyboarding and waited until his computerized galleys of type were ready for us to paste into our page layouts on drafting tables. His work was nearly flawless, and I shudder now at some of the copyediting errors he quietly corrected on our behalf. Occasionally he would call to ask with a quiet laugh, “Did you really mean for me to typeset that, or would you like me to go ahead and fix it?”
In Fall 1978, we weaned ourselves from dependence on Hiler’s galleys of type when the Optimist began doing its own typesetting and page-layout work on Compugraphic video display terminals. It didn’t take long to discover what we had taken for granted in his work: the tedious attention to detail, the perseverance, the selfless contributions he had made to each issue for years.
I got to know Irv better when I returned to ACU to become director of publications in 1983. His role evolved as his career wound down and technology changed. But he remains among the most humble, quiet, gracious and unflappable persons I have ever known, especially given the relentless deadline-oriented work he did for a university before the days of email and social media, when virtually everything ACU wanted others to know needed to first be printed.
In the community, Irv was a cornerstone of the Abilene Founder Lions Club, serving in nearly every leadership role possible, including district governor and chair of the Texas Lions Council of Governors. He also was a reliable volunteer for Abilene’s Meals on Wheels.
Survivors include a sister, Eula B. (Hiler ’40) Farmer; two sons, Jimmy (’77) and Gary (’73); a daughter, Anita (Hiler ’75) Cahoon; five grandchildren and seven great-grandchildren. A memorial service will be held July 23 at 2 p.m. at University Church of Christ, where he was a deacon and attended faithfully for more than 60 years. Visitation is 6-8 p.m. July 21 at Elliott-Hamil Funeral Home.
PREVIOUS POST   NEXT POST
SHARE: