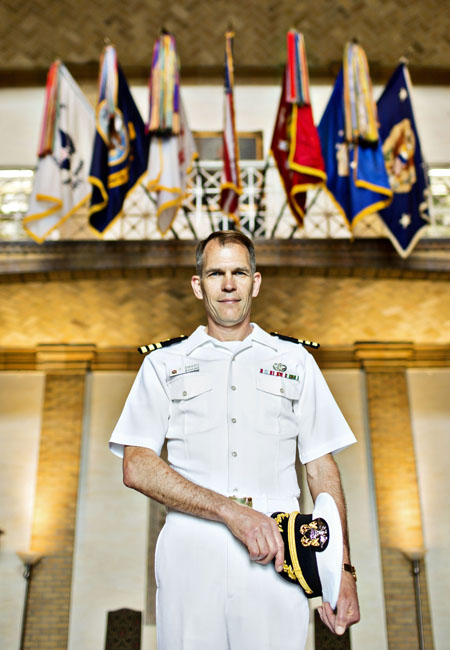 By the time you read this, Cmdr. David Bynum (’84), a Navy chaplain, will have earned his fifth academic degree, this one from the National War College (NWC) at historic Fort McNair where the Potomac and Anacostia rivers meet in Washington, D.C.
Bynum – Abilene Christian University’s 2013 Outstanding Alumnus of the Year – has three degrees from ACU: a bachelor’s in biblical studies, a Master of Divinity and a D.Min. He added a master’s degree in religion and culture from Duke University in 2003 and followed that June 16 with a master’s degree in national security strategy from the NWC, a school in the National Defense University. Bynum had a dozen years of church ministry to his credit before exploring opportunities to serve his country and continue using his theological education.

Created in 1946, the NWC counts among its more than 10,000 graduates Colin Powell, former U.S. secretary of state and chairman of the joint chiefs of staff, and U.S. Sen. John McCain. The NWC educates future leaders of the armed forces, State Department and other civilian agencies for high-level policy, command and staff responsibilities. In September, Bynum will be promoted to captain and his next office location will be the Pentagon.
Freelancer Scott Suchman, who has photographed Washington, D.C.-based alumni for us for many years, spent part of a day with Bynum to capture images for our Spring-Summer 2013 issue.
Read more about Bynum and other ACU alumni award winners here.