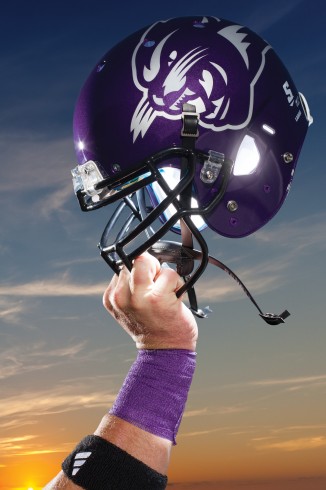 July 1 may be just another day on the 2013 calendar, but at Abilene Christian University it’s a landmark moment when the Wildcats again become members of the Southland Conference and officially begin life in NCAA Division I.
That move takes place with a new athletics logo on uniforms and other apparel, so we’re helping celebrate with the debut of the football team’s new helmet design on the cover of ACU Today’s Spring-Summer 2013 issue.
The cover story of our 80-pager (with another 32 pages of online-only Bonus Coverage) takes a look at the development of “The New Cat in Town,” and provides the inside scoop on a new athletics era in “Hello Division I,” including exciting news of some of the big-name competitors appearing on Wildcat schedules beginning this fall. Texas Tech in Moody Coliseum for women’s volleyball? Check. Men’s basketball games with teams from the Atlantic Coast Conference and Atlantic 10 Conference? Yep. Baseball games against teams from the Big 12, Pac 12 and SEC? Sure.
We also provide a Southland Conference primer for fans, introducing them to the 13 other universities in the conference, and for extra measure, a sneak peak at the football team’s new Adidas uniforms and a look back at some Wildcat student-athletes whose names and numbers are still prominent in Southland record books. (ACU was a founding member of the conference in 1963.)
Other stories you won’t want to miss:

Watch this blog in the next couple weeks for backstories of some of these major articles in the new issue.
Enjoy the online version here.