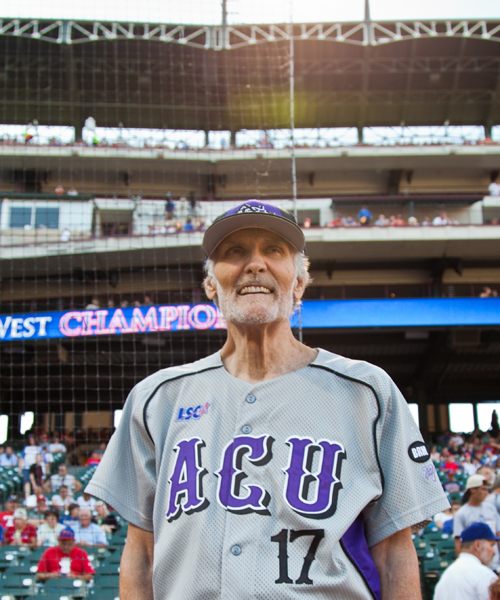 Earl Young (’62) has been on center stage many times in his life, from winning an Olympic gold medal to setting world records in track and field. A pitching mound was foreign territory Monday night at Rangers Ballpark in Arlington, but the former quartermiler delivered once again. 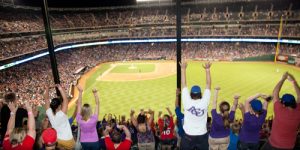 Abilene Christian University asked the longtime Dallas businessman to represent the Wildcats in throwing the ceremonial first pitch before the MLB game between Texas and Cleveland. Loud cheers resonated in right field from sections 247-251, where more than 770 friends and fans of ACU gathered for the annual summertime get-together sponsored by the Alumni Association. 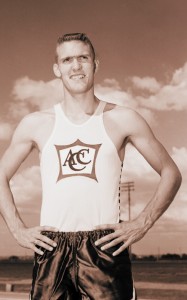 Young won a gold medal in Rome with his country’s 1600-meter relay team during the 1960 Olympic Games, and also finished sixth in the 400 meters. At age 19, he was the youngest member of the U.S. track and field team and one of the brightest stars in the sport.
Wearing an ACU baseball jersey Monday night, the 72-year-old former Olympic star brought his gold medal to show to Wildcat fans of all ages. He called his baseball experience “fantastic” on a night when the Rangers won, 6-3, and he shook hands before the game with the team’s CEO, Nolan Ryan, who knows a thing or two about pitching.
“This ranks way up there at the top,” said Young, who appeared on the June 19, 1961, cover of Sports Illustrated magazine as a sophomore wearing his ACU track and field uniform.
Abilene Christian had a similar opportunity at a Rangers’ game June 12, 2012, when ACU president Dr. Phil Schubert (’91) threw the ceremonial first pitch. He was joined on the field that night by country music star Aaron Watson (’00), who sang the national anthem.
See the Alumni Relations Flickr page for more images from the Rangers’ game. Thanks to Kim Leeson and Rachael Hubbard for their photography.