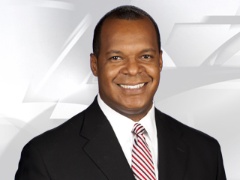 Abilene Christian University journalism graduate Wendell Edwards (’92) is helping Oklahoma City’s KOCO-TV5 provide live coverage of the aftermath of yesterday’s deadly tornado in nearby Moore, Okla.
Edwards, a 2005 recipient of the Gutenberg Award for distinguished career achievement from ACU’s Department of Journalism and Mass Communication, anchors Eyewitness News 5 in The Morning.
Prior to joining KOCO-TV in 2009, he served as a general assignment reporter at KHOU-TV in Houston, Texas. He also reported and anchored for WOOD-TV News 8 in Grand Rapids, Mich., and WIS News-10 in Columbia, S.C.
A seven-time all-America hurdler for the Wildcats who twice was named academic all-America, he participated in the 1992 Olympic Trials in track and field.
Watch KOCO-TV’s live coverage here.