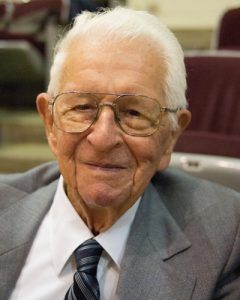 Jack Pope (’34), one of Abilene’s most famous sons and an esteemed state jurist who has inspired two generations of public servants at his alma mater, will be showered with greetings today in Austin when he turns 100 years old.
The only Abilene Christian University graduate to serve as chief justice of the Texas Supreme Court, Pope also is a former trustee of ACU. Birthday wishes are being delivered to his home from ACU administrators, as well as current and former members of the Jack Pope Fellows Program.
At 1:05 p.m. CST today, the Texas House of Representatives will pause to recognize Pope as the longest-living state chief justice in U.S. history. The livestream can be viewed here.
“This occasion is a milestone, for Chief Justice Pope and for Texas,” said Chief Justice Wallace B. Jefferson. “But this is more than a birthday celebration. This is an event to honor one of the country’s great legal legends.”
“Few persons in Texas history have been as instrumental and inspiring from the bench and in his professional life,” said ACU’s Dr. Neal Coates (’87), professor and chair of political science.
Pope earned his law degree from the The University of Texas at Austin in 1937. At age 33, he was appointed by Gov. Coke Stevenson to the state district court in Nueces County, becoming the youngest district court judge in Texas. In 1950, Pope was elected to a six-year term in the Court of Civil Appeals, re-elected two more times, and elected to the Texas Supreme Court in 1964. He was appointed chief justice in October 1982 and retired in 1985.


Abilene Christian established the interdisciplinary Pope Fellows program in November 1985 with the proceeds of a gala dinner that raised more than $519,000. The Pope scholarship is offered to outstanding ACU students pursuing careers in public service each year, providing them opportunities to attend special lectures, gain practical experience and participate in special activities designed to enrich their career preparation.
“He has modeled a life of service in the public sector and has shown that an individual committed to a high level of competence and to fairness can make the world a better place,” said Dr. David Dillman (’70), professor of political science and director of the Pope Fellows program. He not only endorsed but more importantly, practiced the high ideals of public service.”
Pope is considered the “father” of Texas water rights law, an innovator in streamlining how cases are tried, and an advocate for judicial ethics guidelines. While he downplays his reputation and eschews using his considerable influence, to appreciate the way he is revered in Austin, one only need to see how legislators from both sides of the political aisle fawn over him when he visits the Capitol. Many people stop to greet and have their photo taken with one of the state’s most humble and beloved public servants.
While being interviewed by former Pope Fellow Kasey Pipes (’95) for a profile in the 2005 Centennial book, The ACU Century, Pipes recounted a moment in which the judge spoke candidly of his love for Abilene Christian:

His phone rings. He apologizes and answers. “Yes, I won’t take anything less for it,” he says emphatically.
Even at 92, his voice still rings with authority. His mind is clear and focused on the goal. “This is important to me,” he tells the caller, “we have to get it right.” After hanging up, he sits back down and openly shares the conversation. “I’m selling my ranch,” he confides. “I want to pay back Abilene Christian for my tuition.” His tuition? A tuition in the early 1930s would be pocket change today. Why is he selling his ranch – the one once owned by his revered ancestor, John Berry [an Austin pioneer who fought in the Texas Revolution] – to pay for it?
He goes on to explain that even though he was given scholarship money to attend Abilene Christian, he feels he owes a great debt. “Abilene Christian gave me everything,” he says with pride. “I want to sell the ranch and give them enough money to help others get the same education I did.”
Not only will he give a great sum of money to his alma mater, but also his papers. Countless boxes reside at his Austin home, each holding memos, speeches, court rulings and other priceless pieces of his judicial legacy. Thanks to this gift, when historians and scholars seek to write about and understand the Texas Supreme Court of the 20th century, they will have to include a stop in Abilene on their itinerary. 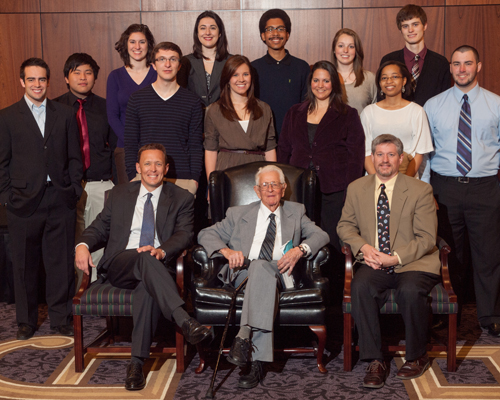