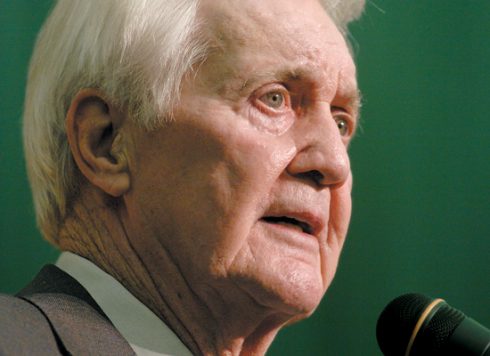 One of the most distinctive voices from Abilene Christian University’s Centennial Celebration was that of Pat Summerall, the American sports broadcasting legend who died today in Dallas at age 82.
The Centennial Speakers Series audience gathered Nov. 8, 2005, in ACU’s Teague Special Events Center expected to hear about the former NFL player’s experiences and, later, his long career as the voice of televised pro football and golf in America. He covered some of that ground, for sure, but more than a few were surprised to hear his luncheon address chiefly detail a personal faith journey in which he survived alcoholism, a liver transplant in 2004 and a failed marriage to become a born-again Christian.
Summerall said he passed many hours of time reading a Bible while being treated at the Betty Ford Center. “I started to realize as I read the Bible that there were a lot of things I didn’t know,” he said. “There were a lot of things I had left out of this very successful life I thought I had.”
He described his feelings of being baptized at age 66 in a church building in Euless, Texas:

“At that moment, with all the good things, all the Super Bowls, all the Masters golf tournaments, and all the things that I had ever done, I felt so helpless. I felt like my life [was] not mine anymore. Whatever I [had] done with it [didn’t] matter anymore, because I realized I was giving up my life. I realized before I went into that water that I had no strength. If I was going to get up out of the water, he [the minister who baptized Summerall] was going to have to do it because I couldn’t do it. I was just totally weak. I went into the water, and I got back up (he brought me back up, thank goodness). I had a feeling of exuberance. … I felt so good. This is a revelation I had never experienced before. I felt like I know what they talk about now when somebody says they were reborn, because I had just been reborn. And I was so happy at that time. When I stood upright and realized, not that I had given my life to Christ, but that Christ had been willing to accept me into His realm and take me as a member – it [was] a feeling I can’t describe. It’s a feeling like nothing I have ever had before in my life. I really felt like I had been reborn, and I started to live life in a completely different fashion.” 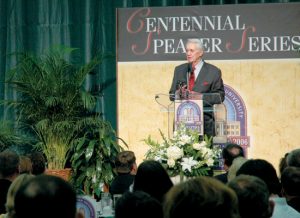 In the Fall 2012 issue of ACU Today magazine, “The Power of Internships” sidebar story on page 75 mentioned the role Summerall played in the education of ACU graduate and current trustee Lance Barrow (’77), whose first job as a student intern at CBS Sports was serving as a spotter for the venerable broadcaster. Barrow is now an Emmy Award-winning coordinating producer of golf and NFL for the network. Nearly 35 years after first working with Summerall, Barrow gave Hutton Harris (’08) a similar opportunity, allowing the young man to help cover dozens of PGA golf tournaments for CBS. Harris is now employed by the Texas Rangers Baseball Club.
“In 1976, I was a junior in college and [veteran CBS golf producer] Chuck Will put me in the 18th tower as a spotter for Pat Summerall,” Barrow said this afternoon in a news release. “He told me, ‘You’re not going to meet a finer man in this business than Pat Summerall.’ And to this day, I never have. He was kind to everyone. When you were around him you never knew that he was the number one broadcaster. He taught me so much, not only about this business, but how to treat people.”