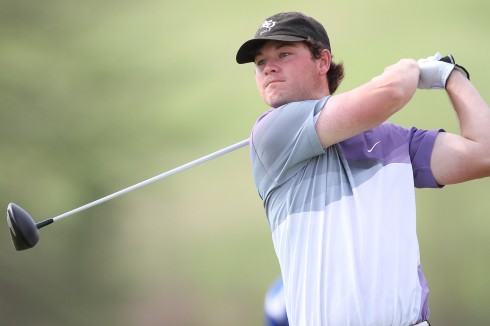 It’s time for The Masters tournament this week on the PGA Tour, a convenient coincidence when you consider the skill Abilene Christian University senior Alex Carpenter is displaying in NCAA events in which he plays this spring.
A native of Arkansas, Carpenter won the Phil Mickelson Award in 2010 as the top freshman golfer in NCAA Division II, thanks to a win at the prestigious Southern Amateur following a rookie season in which he won four tournaments, helped lead ACU to the national championship and qualified for the U.S. Amateur Championship.
Mickelson, a three-time winner of The Masters and five-time runner-up in the U.S. Open, has won 41 professional tournaments. Previously, he forged one of the top amateur careers in American golf history.
But Mickelson’s record of 16 career collegiate victories at Arizona State University is getting smaller and smaller in Alex’s rear-view mirror, thanks to the Wildcat star’s victory Tuesday in the Dallas Baptist Classic – Carpenter’s fourth straight win of 2013 and the 20th of his career. He has now won 42 percent of the 48 events in which he has entered, with three more on the schedule this spring.
Carpenter, who shot 14 birdies and was 11-under on par 5 holes in the Dallas Baptist Classic, became the first current Wildcat student-athlete to play in a PGA Tour event when he appeared in the 2011 Arnold Palmer Invitational at Bay Hill (an opportunity earned via his Southern Amateur win during the summer of 2010).
ACU’s remaining 2013 tournaments are the Lone Star Conference Championship (April 15-16 at The Golf Club at Champions Circle in Fort Worth), the NCAA Division II South Central/West Super Regional Championship (May 6-8 at The Home Course in Dupont, Wash.) and the NCAA Division II Championship (May 19-24 at Hershey Country Club in Hershey, Pa.).
Carpenter’s brothers, Adam (a senior and his twin) and Luke (a sophomore) also are on the ACU golf roster. All three starred at Arkansas Baptist High School in Little Rock.