One of the memorable Super Bowl commercials last night – for good reasons, of course – was a two-minute spot for Detroit automaker Dodge, built around the voice talent of the late Paul Harvey. In it, Harvey described the virtues of the American farmer, accompanied by poignant portraits and other still images. It was based on a 1978 speech, “So God Made a Farmer,” he delivered at the Future Farmers of America convention. 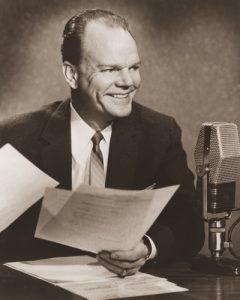 Some of our readers may remember listening to Harvey speak March 26, 1971, in Moody Coliseum on the Abilene Christian University campus in one of three events sponsored or co-sponsored during the 1970-71 school year by the ACU Students’ Association. (The others were concerts by pop music icon Neil Diamond and singer/songwriter/actor Mac Davis.) In his presentation at ACU, titled “A Time to Be Alive,” Harvey covered a broad range of topics.
He was the longtime voice of The Rest of the Story, and Paul Harvey News, a daily roundup of news from around the world, accompanied by his conservative commentary, in which he began with the words, “Hello Americans.”
Harvey was an outspoken patriot who also was a big fan of Christian higher education. In a 1968 speech in Fort Worth, he said,

“When I was a boy, we believed every word in the ‘Good Book’ … but we avoided ‘church schools’ unless we intended to enter the ministry. Young adults would too often graduate from a church school with a diploma for which they had to apologize. Though their college life had been wholesome, too often it has been lacking in academic excellence.
Today, one generation later, church-related educational institutions have learned that they must offer three-dimension education. They must provide faculty and facilities adequate to afford a good liberal arts education. And they can and must do so in a Christian atmosphere.
So now, more and more, the smaller, the more personal church-related college and university has this distinct advantage over the gigantic brain factory.
Now, the diploma from Berkeley is more likely to be depricated than the one from a good school that’s known as a ‘good school.’ ”

Harvey died in 2009, having been named American of the Year and receiving the Presidential Medal of Freedom, the nation’s highest honor for a civilian.