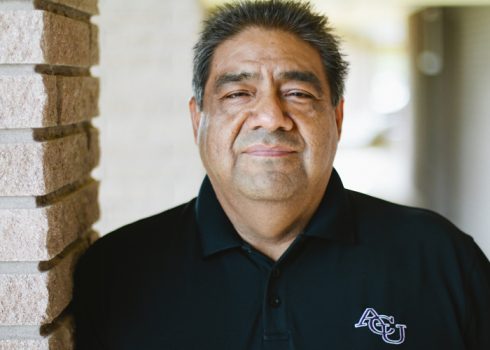 One of the feature stories in the Fall 2012 issue of ACU Today is “Willing and Abel,” a profile of 1982 graduate Abel Alvarez, an ACU trustee and minister of the Harvey Drive Church of Christ in McAllen who is an inspiring example of alumni servant leadership in his South Texas hometown.
For years, Alvarez has recruited students to his alma mater, focusing on those with Hispanic heritage. One was Samuel Palomares (’11), who is now studying toward a  Master of Arts degree in communication studies from The University of Texas at Austin. Palomares, a native of Weslaco who plans to pursue a career in applied social science research (institutional effectiveness, higher education administration or government work), was elected president of the Students’ Association his senior year.
We asked Palomares a few questions about being recruited to Abilene Christian by Alvarez.

What makes Abel a great ambassador for ACU?
Abel loves ACU. He believes in its mission to educate servant-leaders, its aspiration to be a well-rounded Christian university, and of course, his love of all things ACU sports. He has a deep desire for students of all nationalities and ethnicities to experience a transformative Christ-centered education that many of us who graduated from here experienced. In particular, he has a soft spot for students from Spanish-speaking backgrounds. Thanks to his passionate and inspiring recruitment abilities, he has been able to draw numerous students from this background to join the ACU family. Abel’s love for ACU stems from his love of Churches of Christ. As a child, Abel grew up an active member of this group and as a teenager he was heavily involved in Bible bowls and serving his congregation. As a minister, he credits ACU for equipping him with the tools necessary to be in preaching/pastoral role. The university means so much to him because it was a place that nourished his soul, increased his faith, and I’m sure, taught him how to sing.


What did he tell you about ACU or do for you that made you decide to enroll here?
I grew up in Spanish-speaking Churches of Christ (Iglesias de Cristo) like Abel did. As you would expect, my experience vastly differed from the experiences of those from mainstream English speaking churches. For example, I never knew of Christian universities that shared my faith heritage, or funny enough, that Churches of Christ were known for singing four-part harmonies! I grew up thinking that people just sang at the top of their lungs, but that’s a different story.
How did Abel introduce you to ACU?
When I was in high school, I was considering several universities and I knew Abel had gone to ACU. During my senior year of high school, I called Abel out of the blue and asked if I could meet with him to talk about ACU. At our meeting, he told me various facts and figures about ACU but what grabbed my attention the most was his ability to convey its image as a strong academic institution and a place of faith. After our first meeting, he insisted I visit the campus. So much so that he arranged for my dad and I to stay at the home of Robert “Jerry” Strader Sr. (’52) during our visit to Abilene. I thought it was so strange to stay at someone’s house rather than a hotel, but little did I know that that is what ACU people do – open their homes and show strangers hospitality. At least that has been my impression. I remember meeting so many great people on campus during my visit that I called Abel and told him that this is where I wanted to attend.