UPDATE: A live stream of the family’s celebration of Rex’s life will be available today beginning at 10:15 a.m. at acu.edu/live 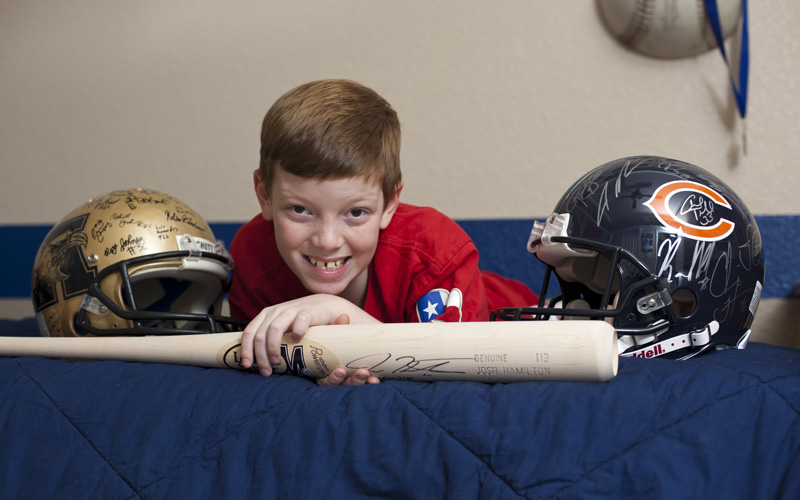 For the past two years, many in the Abilene Christian University community have been involved in a ministry of prayer and encouragement for the family of Rex Fleming, a 10-year-old who died Sunday night after an inspiring battle with brain cancer. His parents are Lance (’92) and Jill Fleming of Abilene. Lance is ACU’s assistant athletics director for media relations and Rex has been an ever-present sidekick to his dad at Abilene Christian sporting events for a decade.

A former journalism graduate of ACU and professional sportswriter, Lance documented his son’s health struggles in unblinking fashion on a CaringBridge Web page that has drawn people from around the globe into the world of pediatric cancer patients for a first-hand look into the soaring “ups” and heart-breaking “downs” they and their families often experience.
Like local high school football teams have done this fall, ACU coaches and student-athletes have honored Rex by wearing P4X (Pray for Rex) bracelets or written his name on their hands and arms and equipment, often to remind them of the youngster while in competition.
The football team made him an honorary captain before its final home game Nov. 3 against the University of West Alabama, inviting him to give the team a pregame speech in the locker room, participate in the coin-toss (he won) and allowing him to call the team’s first play in the 22-16 overtime win. In the Wildcats’ final game Nov. 10 against the University of the Incarnate Word in San Antonio, head coach Ken Collums had his players wear a red wrist band around their ankles.
“I wanted it to be on our ankles as low as it could go,” Collums told the Abilene Reporter-News. “During a game, I don’t want them thinking about Rex. I want them thinking about the game and the game plan. That’s why we didn’t wear them on our arms. But when you get to a point where you bend over and you’re having to take a deep breath because you’re tired or hurt – we all do it in the course of a game – I wanted them to see that. I wanted them to know, ‘Pardner, you’re really not going through much. Tough it out. Your boy (Rex) is going through a lot more than you are right now.’ ”
The Wildcats played for Rex and won, 24-12, to finish their season 7-4. Two weekends later, Rex died in home hospice care and will be buried this Friday.
His body will be available for viewing only from 8 a.m. to 8 p.m. Wednesday and Thursday at Hamil Family Funeral Home (6449 Buffalo Gap Rd.). The family will receive visitors from 5-7 p.m. Thursday at Pioneer Drive Baptist Church (701 S. Pioneer Drive). On Friday, a public graveside service will be 9:30 a.m. at Elmwood Memorial Park (5750 Hwy. 277 South), followed by a memorial service to celebrate Rex’s life at 10:30 a.m. at Pioneer Drive Baptist Church. The services will be under the direction of Hamil Family Funeral Home and will be led by pastor Stan Allcorn and Dr. Jeff Reid.
Rex loved sports and will be buried wearing a Texas Rangers’ jersey. To honor his life and the way he lived it, the family encourages those who attend the memorial service to feel comfortable wearing the jersey/shirt or other attire of their favorite team – Little League, high school, college or professional – or wear a P4X shirt. Traditional attire also is appropriate and welcome.
In lieu of flowers, the family asks that donations be made to the Rex Fleming Endowed Scholarship, Abilene Christian University, ACU Box 29132, Abilene, Texas 79699-9132, or the Pioneer Drive Baptist Church Children’s Ministry, 701 S. Pioneer Drive, Abilene, Texas 79605.
Abilene Reporter-News coverage of Rex begins here. The Optimist student newspaper also documents Rex’s story here. Many thanks to freelance photographer Jeremy Enlow for sharing these images with us.