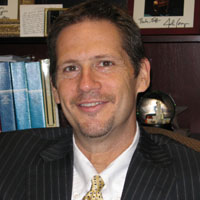 Gov. Rick Perry has appointed Jeffrey S. Boyd (’83) to replace Dale Wainwright as a Texas Supreme Court justice, effective Dec. 3, 2012, for a term to expire at the general election in 2014, making him the second Abilene Christian University graduate to serve on the state’s highest civil court. Jack Pope (’34) was the first: elected in 1964 and appointed chief justice in 1982 before retiring in 1985. He is the namesake of ACU’s Jack Pope Fellows Program, which prepares students for careers in public service.
Texas governors can appoint individuals to fill the unexpired terms of Supreme Court justices who are chosen in statewide elections. Appointees must be approved by a vote of the Texas Senate, which next meets in January 2013.
“Jeff is a highly respected attorney who has consistently excelled throughout his years of private practice, his terms of public service, and his leadership of important charitable organizations. His addition to the court will continue to protect the rule of law and further the tradition of defending the freedoms that Texans so vigorously uphold,” said Perry. “He has earned my confidence, and the confidence of those he has worked with in all his endeavors, because he has a brilliant legal mind, he is committed to preserving the rule of law, and he strives every day to live a life of fairness, integrity and compassion. I know he will bring this same commitment to the Texas Supreme Court, and we will all be better for it.”
Boyd serves as chief of staff for the governor’s office, where he previously served as general counsel. He is a former senior partner in the Austin office of Thompson and Knight LLP, and previously served as deputy attorney general for civil litigation under Texas Attorney General Greg Abbott and former attorney general – and current U.S. senator – John Cornyn.
“We’re very proud of Jeff,” says ACU political science professor and pre-law advisor Dr. Mel Hailey (’70). “That’s a truly high honor.”
Following a brief early career in ministry, Boyd, who was a biblical studies major at ACU, felt he could potentially make a bigger difference in the world by going back to school to earn a law degree, according to Hailey. He graduated with a Juris Doctor degree from the Pepperdine University School of Law and went on to serve as clerk for Judge Thomas Reavley in the Fifth Circuit Court of Appeals in the early 1990s.
Boyd is past president of the board of Volunteer Legal Services of Central Texas, past chair of the board of Goodwill Industries of Central Texas, and a past board member of the Freedom of Information Foundation of Texas and Brentwood Christian School. He also is a past member of the State Bar of Texas Taskforce on Court Administration.
A member of the Abilene Christian University Alumni Advisory Board who lives in Austin, Boyd is married to Jackie (Tubbs ’85) Boyd, and the couple has three children. Two of them, Abbie and Hanna, are ACU students.
Wallace B. Jefferson, current chief justice of the Texas Supreme Court, is married to ACU graduate Rhonda (Lewis ’88) Jefferson.