Home/ ACU News/ Academic News/ Felts was first Homecoming queen in 1951
Main Content
Features Academic News Alumni News Campus News ACU Online All Categories
Academic News ACU News ACU Online ACU Remembers Alumni News Campus News Faculty Spotlights Features Graduate Programs Research Sports Student Experience Student Spotlights Student Success Undergraduate Programs Why ACU?
Addie (Rheiner ’55) Felts was Abilene Christian University’s first Homecoming Queen in 1951 and the Coming-Home Queen in 1961, so there’s not a lot of other royal ground to conquer this weekend at her alma mater.
But she has been invited back to serve as grand marshal of Saturday morning’s parade, which pretty much tops off any personal bucket list an alumna might have for this annual weekend, unless she also wants to quarterback the football team or star in the Homecoming Musical. While she is town this weekend, Felts will attend the by-invitation-only Queen’s Tea on Friday and Homecoming Chapel at 10:45 a.m. Saturday. 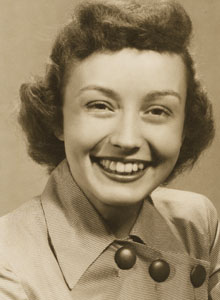 The Felts family has deep roots on the Hill. Addie’s late husband, Richard Felts (’53), was the manager of the World Famous Bean (previously known as Carter Cafeteria)  and affectionately referred to by students as “dean of the Bean” and “Uncle Dick.” Addie was ACU’s first women’s track and field coach when the Wildcats started that program in 1976 and she also was associate professor of health, physical education and recreation in what is now known as the Department of Kinesiology and Nutrition.
All five of her children – Susan (Felts ’75) Hatcher, Sara (Felts ’77) Dubose, Ricky Felts (’80), Sherry (Felts ’81) Ratliff and Sharon (Felts ’92) Shipley – and 16 of her 20 grandchildren have attended ACU. Her 16th also is her namesake, Addie Jane Shipley, a freshman this fall.
As a busy and popular student, Addie was Freshman Favorite; a cheerleader; campus beauty; a member of the W Club, Campus Service Organization and A Cappella Chorus; and Miss ACC.
Today she is a mainstay of the Austin Avenue Church of Christ in Brownwood, and even at age 80, devotes Sunday afternoons to teaching classes for women inmates at the Brown County Jail, and Wednesday nights to cooking for Hope Class, which ministers to recent inmates and others in need.
ACU’s Homecoming Court for 2012 includes:

And for the first time, there will be a male student recognized by a new light-hearted university-wide honor proposed and approved by the ACU Students’Association to recognize “an all-around good student who is involved in the ACU community,” according to a recent article in The Optimist. Four seniors are finalists; a King of Campus Court will be chosen Friday and participate in the Homecoming parade: