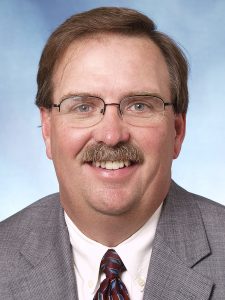 Dr. Darryl L. Jinkerson, associate professor of management at Abilene Christian University, died suddenly Oct. 12, 2012. He was 54.
Born Jan. 21, 1958, in East St. Louis, Ill., he grew up in O’Fallon, Ill., where he graduated from high school. He met fellow freshman Cindy Madden in the registration line at Harding University, and they married Aug. 11, 1979, before beginning their senior year together.
He earned a B.A. from Harding University, a M.S. in clinical psychology from Northeast Louisiana University and a Ph.D. in applied psychology from Southern Illinois University. He completed his dissertation while he was director of assessment and measurement for Arthur Andersen LLP at its offices in St. Charles, Ill. He also worked for three years for Service Companies in Roselle, Ill., as its vice president.
During their years in the Chicago area, the Jinkersons were active members of the West Chicago Church of Christ, where he served as an elder. For 17 years he was president of the Rockford Christian Camp in Illinois. When the family moved to Texas the camp named a pavilion in his honor.
Jinkerson joined the ACU faculty in 2002. During his first year, he was honored as the Teacher of the Year in the Department of Management Sciences, later serving four years as department chair. He enjoyed the classroom and the daily interaction with students, helping them make real life connections to the business world. He relished finding new and innovative ways to teach lessons, using card games and packages of M&Ms to teach statistics, and movie clips to bring home points in management or development.
His prior teaching experience included two years as an adjunct professor of business at Judson College in Elgin, Ill., and eight as an adjunct professor of psychology at North Central College in Naperville.
At ACU, Jinkerson led the study abroad program for the College of Business Administration and had taken numerous groups of students for international studies in Honduras, China, Australia and England. In addition to his academic trips, he had gone to Honduras several times with Mission Lazarus and Torch Missions, traveling with his daughters and building a house there in memory of his father, who died in 2007.
He was a member of the University Assessment Committee, a Sam Walton Fellow serving as ACU’s Students in Free Enterprise chapter and served several terms on Faculty Senate.
His research interests in evaluation and measurement, performance improvement, and leadership selection models led to publications in several refereed journals and dozens of presentations at professional and academic conferences. Throughout his academic career he maintained an active consulting practice, serving national corporations, local non-profits and businesses, and municipalities in Illinois and Texas.
The Jinkersons were active members of University Church of Christ, where he was an elder and led or served on several committees. He previously served as an elder of Highway 36 Church of Christ, south of Abilene. He was a member of the board of directors at Abilene Christian Schools and led its CEO Selection Committee.
Darryl is survived by his wife, Cindy; three daughters, Whitney Olsen and her husband, Eric, of Corsicana; Rachel Goodman and her husband, Michael, of Abilene; and Amanda Carpenter and her husband, Pierce, of Abilene; and a granddaughter, London Olsen. He also is survived by his mother, LaVerne, of O’Fallon, Ill.; two brothers, Richard and his wife, Karen, of Lake in the Hills, Ill., and their three children, Perry and his wife, Sylvia, of Starkville, Miss., and their three children; and one sister, Cheryl Hamm and her husband, Wes, of St. Louis, and their two children.
Visitation is Wednesday, Oct. 17, from 6-8 p.m. at Piersall-Benton Funeral Directors (733 Butternut, Abilene, Texas 79602), with a memorial service at 2 p.m., Thursday, Oct. 18, at Abilene’s University Church of Christ.