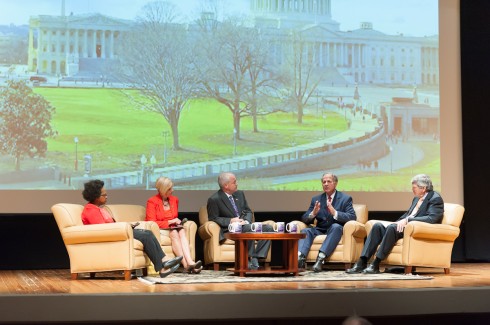 Here at the height of the campaign season, most political candidates are working dawn to dusk to get their messages out: “Keep me on the job in Washington,” or “Send me to Capitol Hill to fix the mess we’re in.”
A case could be made that Abilene Christian University alumni Rep. Janice Hahn (’74) and Rep. Ted Poe (’70), both of whom now serve in the U.S. Congress, should have been home in their respective districts stumping for votes this week. Instead, they chose to spend Sept. 25 on campus sharing their views with students.
Among other gatherings on campus, the two participated in A Forum on Civil Discourse and Christian Faith in Cullen Auditorium, joined by Dr. Orneita Burton, ACU assistant professor of management and information systems; Grant Rampy (’87), director of public relations; and Dr. Mel Hailey (’70), political science professor and chair. Hahn represents Los Angeles and Poe was elected by voters in Houston.


The opportunity for students to hear from not one but two current members of Congress would be news by itself, but the real take-away headline proved to be: Democrats and Republicans Can Get Along.
Scratch that. Hahn and Poe don’t just get along; they actually like each other.
They’re bucking a trend in Washington that says members of opposing parties not only don’t get along but are incapable of working together. Hahn and Poe joined forces earlier this year to push legislation through Congress to strengthen port security from coast to coast.
“You’ve probably never heard of it, because (our relationship) is working,” Poe said. “Good legislation is bipartisan. That’s not what sells newspapers.”
Hahn says, when she arrived on Capitol Hill as a freshman lawmaker last year, she immediately sought out Poe.
“I said ‘We’re both graduates of ACU, I think we should be friends, I think we should work together, and I think there are so many things we can agree on,’ ” Hahn told students. “I’m going to get more accomplished for this country by making friends than I am staying in my corner and fighting.”
“It surprises a lot of people that Janice and I are friends, and I don’t know who it bothers more, the Republicans or the Democrats,” Poe laughed.
He went on to discuss how being a good member of Congress means it’s vital that other members’ views be considered, regardless of their party affiliation, race, gender or religious background. He acknowledged, however, that party structures make it difficult to reach out to the other side.
“There are paybacks or punishment available for not drinking the Kool-Aid, so to speak,” Poe said, while describing party leaders who can strip away an important title or withhold important committee assignments from those who don’t toe the party line.
“No question about it, we live in a society that really likes conflict and promotes it socially,” said Poe. “Where we work in the U.S. House of Representatives, the 435 of us there, part of our job is to disagree, to debate, to discuss, to have conflict sometimes and how we do that is a different issue. What we do every day is take a issue and examine it and look at it from at least two sides, sometimes more sides, and discuss it, debate it and sometimes that results in some vigorous disagreements in what ought to happen.”
Both Hahn and Poe know Americans are tired of the constant infighting that more often than not keeps Congress from doing its job, but Hahn said the responsibility for the caustic atmosphere extends to the public.
“Voters need to be more responsible in making sure the people they elect don’t go back there with a so-called mandate to not compromise,” she said.
Reflecting on their Christian faith, both lawmakers say it plays a vital role in how they make decisions while conducting the nation’s business.
“I tend to believe my Christian values, my faith cause me to be an activist in government and cause me to advocate for the poor, those who don’t have a voice. That’s how I live out my Christian faith here on earth, and I think you can do that in government,” said Hahn.
“(My) Christian faith is paramount in everything I do every day,” said Poe, who was ACU’s 2009 Outstanding Alumnus of the Year. “You need, I need that foundation of conviction or principles to make decisions throughout the day for the things that are best for the country.”
Watch this video of Hahn and Poe taking part in A Forum on Civil Discourse and Christian Faith. You also can watch the full discussion here.
PREVIOUS POST   NEXT POST
SHARE: