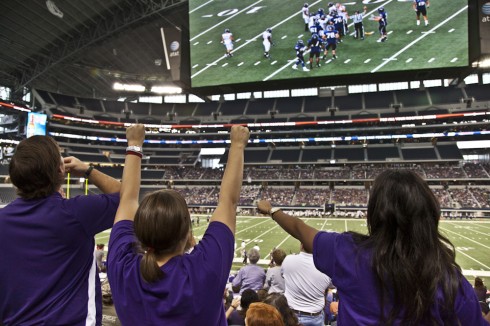 Half of those wearing purple went home happy Saturday night from Cowboys Stadium in Arlington, the exception being the fans of Tarleton State University). The ACU Wildcat football team had something to do with that, rallying in the second half to take an exciting 34-31 win over the rival Texans in the second annual Lone Star Football Festival.

Fans gathered in the Dr Pepper End Zone for a pregame meal, then found their seats below for the game, one of three that day that drew 19,134 to the home of the Dallas Cowboys. In all, the three-day, six-game Lone Star Football Festival attracted 33,180 people to enjoy high school (Southlake Carroll and Temple), and college (ACU, Tarleton, Texas A&M-Kingsville, West Texas A&M, Midwestern State, Texas A&M-Commerce, Angelo State, Valdosta State, Eastern New Mexico and Incarnate Word) football games while the NFL Cowboys were on the road in Seattle to play the Seahawks.
For the second year in a row, ACU fans again composed the biggest crowd of all, and head coach Ken Collums’ team did not disappoint. The Wildcats rallied with 24 second-half points to overcome Tarleton and improve their record to 2-1 on the season. Junior wide receiver Taylor Gabriel caught two TD passes from senior quarterback Mitchell Gale, the second one sealing the win.
Photographers David Leeson (’78) and Kim Ritzenthaler helped capture the fun. Here’s a quick look: