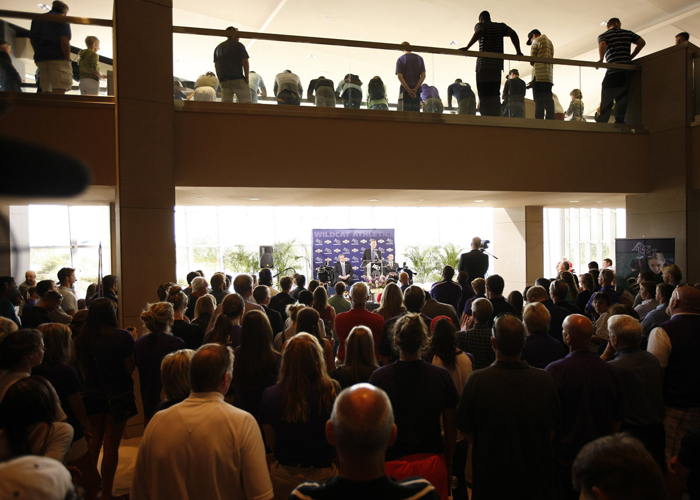 Seven days from now, Abilene Christian University plays a crosstown rival (McMurry) in football for the first time in 41 years. So, in the spirit of making a little history whenever the opportunity arises, the Wildcats did something this afternoon they haven’t done in almost 50 years – agree to play in the Southland Conference, a respected NCAA Division I league they helped found in 1963.

A crowd of several hundred trustees, faculty, staff, coaches, student-athletes and fans were on hand in the lobby of the Hunter Welcome Center to attend the press conference/announcement and heartily applaud the news the Wildcats would, as some have termed it, “go D-One.”


“This is a great day,” began Dr. Phil Schubert (’91), the ACU president who two years ago asked athletics director Jared Mosley (’91) to begin a comprehensive study of intercollegiate athletics at Abilene Christian. After much research and introspection, dialogue with other universities, and meetings with faculty and staff back on campus, their conclusion was that Division I was the best fit for ACU’s future, reinforced by a recent invitation from the Southland to join its 13-university conference. Last night, the university’s Board of Trustees agreed.
University officials say the move is as much about academics as athletics.
“On behalf of our board, faculty, staff, students and fans, we are pleased to have this opportunity to help make the Southland one of the strongest FCS conferences in the nation,” said Schubert. “We are honored to be partners with some familiar and new friends in the league, and to continue to fulfill our own unique mission alongside them. We are serious about achieving academic and athletics excellence, and we are confident that Division I is the best place to continue our strong commitment to both.”
The university has created a website to share news about the transition, which begins in Fall 2013.
Schubert said ACU is “a place where young men and women come to be shaped in the image of Christ,” and this change is just another step in that process, and will be one that gives the university even more opportunities to spread its influence and tell its story. He made a special point to recognize Mosley and his athletics staff, along with Faculty Senate chair Dr. Rodney Ashlock (’91 M.Div.) and the Abilene Christian faculty.
“This culminates the membership expansion process for us,”said Southland commissioner Tom Burnett, who complimented ACU on its “reasonable, measured and smart way” to research and decide to move up to his Division I FCS (Football Championship Subdivision) conference. Burnett has been to similar press conferences in the past days and months to welcome the University of New Orleans, University of the Incarnate Word, Houston Baptist University and Oral Roberts University to his league. Burnett said he and his visit committee enjoyed their tour of the Wildcat campus and discussions with university officials in late July. “We couldn’t have left more impressed with ACU,” he said.
“The Southland Conference Board of Directors enthusiastically welcomes Abilene Christian University as our newest member,” said Dr. Baker Pattillo, Southland board chair and the president at Stephen F. Austin State University. “We are honored to learn of the institution’s acceptance of our offer, we appreciate the approval from the ACU Board of Trustees, and we’ve admired the leadership of president Dr. Phil Schubert and the diligent work of athletic director Jared Mosley throughout this process. The Southland presidents look forward to a beneficial partnership with ACU and its athletic program.”
“I want people hanging from the rafters everywhere we go in in the Southland Conference,” said Mosley in his comments, glancing around the crowded lobby and at student-athletes looking down on the press conference from an overhead walkway.
“I want to win and I want to compete,” Mosley said, but “the conference transition will be grounded in the same high standards that were established long before I got here” as a standout basketball player in the mid-1990s. Mosley said he is confident ACU’s move will result in “a future even brighter than our past.”
He also complimented ACU’s longtime partner institutions in the Lone Star Conference, where the Wildcats have competed for 39 years.
“We’ve enjoyed great rivalries with West Texas A&M, Angelo State, Texas A&M-Kingsville, Texas A&M-Commerce and others, and we’ll always have deep respect for those institutions, the competition we shared and the talented student-athletes who will always be a part of that heritage. We will always remember these rivalries,” Mosley said, adding that “I want to go out with a bang” in ACU’s upcoming 40th and final year in the LSC and Division II.
McMurry University, which is competing in Division II for the first time this fall, will be the first stop on that farewell tour next Saturday at 6 p.m. in Shotwell Stadium.