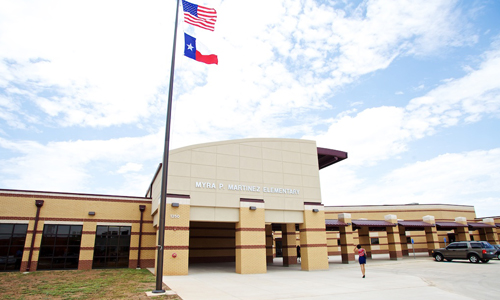 The first new elementary school built in Abilene in 20 years was dedicated Aug. 15 to the memory of a young teacher and alumna of Abilene Christian University who died in 2004 but left an enduring legacy in the community.


Myra P. Martinez Elementary School, named after a 1994 ACU graduate who taught at College Heights and Fannin on the city’s north side, opened for the community to tour.
Its principal, fittingly, is an ACU graduate as well. Linda Case, who earned an M.Ed. in 1977 in addition to other educational management certifications from ACU in 1983 and 1990, was principal of Jackson Elementary School for 14 years.
Martinez Elementary was built on the site of the old Franklin Middle School on the corner of North 12th and Merchant streets, and honors a beloved teacher who died of lupus in 2004 at age 34. Martinez graduated from ACU in 1994 and taught eight years before moving to the Region 14 Education Service Center to consult on projects designed to help bilingual students.
The $7.02 million project replaces Fannin and College Heights – two elementary schools in which Martinez once taught and for which Case split principal duties before they closed following the 2011-12 school year. At 64,500 square feet in size, Martinez is the largest elementary school in Abilene, and features 38 classrooms and three computer labs.
Stan Lambert (’75), president of the AISD Board of Trustees, participated in the ceremony, which included the unveiling of a framed portrait of Martinez.