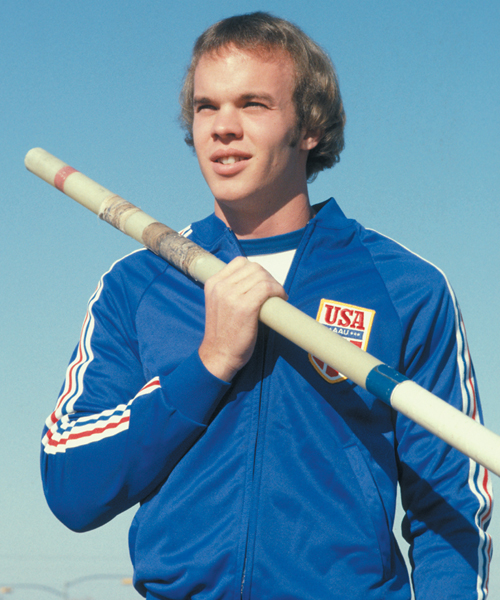 The highest-flying Wildcat pole vaulter of all time was Billy Olson (’81), a 1988 U.S. Olympian who  was projected by many to make the 1980 team in Moscow until President Jimmy Carter announced a boycott to protest the Soviet occupation of Afghanistan. He finished seventh in the 1984 Olympic Trials, but was competing on a foot with three stress fractures and ligament damage.

Olson was the top-ranked vaulter in the world in 1982, and Indoor Athlete of the Year in 1982 and 1983. He and Russian Sergey Bubka put on a dazzling assault on the record books from 1982-86, with Olson setting the indoor world record 11 times and Bubka setting five of his eventual 18 indoor world records during that time frame. Olson was the first man to jump 19 feet indoors; Bubka the first to jump 20 outdoors.

What was it like to jet around the world on weekends from one track meet to another?

The travel was fun when I was younger. Getting to see the world as a young guy from Abilene, Texas, was a true blessing. As week after week went by, I would start wearing down from the travel, bad food and lack of training; it got pretty tough.

When I got older I dreaded the travel but always loved to compete. Most people know the difficulty of traveling with a few suitcases, but try air travel with five 16 feet 5 inch poles.

What attributes does one need to be successful as a pole vaulter?

There are a number of them but maybe the most important is confidence. Running full speed with a 16 feet 5 inch pole and planting it in a box in the ground that is 13 feet 6 inches away from your take-off foot is pretty scary for many people, not counting going 18 or 19 feet in the air and hoping to land safely in the pit. It is helpful for a vaulter to be tall because the greater angle you can create with the ground makes the pole easier to bend. Speed and strength also are very important in being able to jump high.

Coach Hood was almost always available to meet you at the track, day or night, to run, lift or jump.  He also was good at pushing the right motivation buttons to keep each individual going in the right direction. We were also very blessed to have so many great vaulters at ACU around the same time.  With guys like Frank Estes (’80), Brad Pursley (’84), Tim Bright (’83), Dale Jenkins (’86), Bobby Williams (’85), Steve Thaxton (’87) and others, there was no chance to do anything but work hard.  We pushed each other and competed relentlessly but always helped and supported each other. It was a special time.

Why were you more successful indoors than outdoors?

Honestly, there were many reasons I was more successful indoors. First and foremost, I loved the indoor atmosphere where everything was close together and the crowd was right on top of the athletes. It was always loud and rowdy, especially if you jumped high. Second, I loved the sound and feel of the boards indoors. It was easy to hear my stride cadence and accelerate all the way through the take-off. Third, there were 15-16 meets each January and February and if I jumped well, I could make two or three times the money I could for the rest of the U.S. and European outdoor seasons. The downside of such a crazy indoor schedule is I was usually completely worn out and often injured by February, and it would take some time to get going again.

How do you describe the Olympic experience for an athlete to someone who has never been done that?

In my youth, it was many kids’ dream to one day compete for a medal in the Olympic Games. That was my thought also, but it didn’t seem like I would ever have a chance. With the United States boycott of the Moscow Games in 1980 and a foot injury in 1984 (Los Angeles), I thought my dream would never become a reality. The Seoul Olympics in 1988 were bittersweet for me because I was 30 years old, injury-plagued, past my prime and unable to compete at a high level two times in three days. In fact, by that time it was difficult for me to compete at a high level on many days; it was hit or miss.

We jumped in qualifying at the end of the stadium, with a nice tail wind, and I made the 18’ qualifying height by well over a foot. In the finals we jumped in front of the main stands in a tough wind.  No matter how much I wanted to, my old legs just refused to go and I barely made 18’.  In spite of my poor showing, I was extremely proud to finally be able to compete in the Olympic Games and participate in an event where the world came together in sport.

What are your best memories of the 1988 Games in Seoul?

By far, my favorite memory of the 1988 Games was seeing my longtime good friend, Louise Ritter, winning the gold medal in the high jump for the U.S. We had been training together for several years at SMU and I had a front seat watching her go through great, but also difficult times. She was not nearly the favorite jumping against the then and still world record holder Stefka Kostadinova, who had jumped several inches higher than Louise. The morning of the final, Louise asked me to please bring my video camera. At that time it was a big two-piece unit that was bulky and heavy. I told her  my seats were not close enough and I wouldn’t be able to get any good video of her jumps. She said, “I don’t want you to bring it to video my jumps, I want you to bring it to video the medal ceremony.”  That gave me goose bumps then and to this day, when I think of what she said, it still does.

What are your feelings today about not getting to compete in the 1980 Olympic Games?

That was a tough one for me, especially because I was so young and had little to no knowledge of the politics behind our nation’s boycott of the Games in Moscow. When I found out we were not going to the Olympics at the Texas Relays in early April, it was devastating. I was so mad, for a long time I wasn’t planning on even going to the U.S. Olympic Trials (they were held even though we were boycotting the Olympics), but just go straight to Europe. After the Trials I went to Europe and competed in eight meets before the Olympics, winning seven and getting beat on misses in the rain in the other. Three times I jumped against the man who eventually won the 1980 Olympics (Poland’s Władysław Kozakiewicz), and beat him all three. It does no good now to say that our President Jimmy Carter-led boycott accomplished little except to prompt the Soviets and other countries to boycott the following Olympics (1984) in Los Angeles.

Are you still in business with former ACU teammate and pole vaulter Brad Pursley, and does your competitiveness with each other still affect your friendship?

Brad Pursley has been my best friend almost since we first met in 1977. He was a great training partner (he held the American outdoor pole vault record at one point) who always pushed me to work harder and we both benefited from that. For the last seven years, Brad has joined me in the bail bond business and with our completely different personalities, things have worked out better than I could have ever hoped for.

How is it possible Billy Olson is 55 years old?

You always hear how time flies … it has!

ACU has produced 36 Olympians in track and field, and another two from the London Games are transferring in this fall. What makes this span of success possible, considering there have been a number of different head coaches since the 1950s, with different coaching styles and specialties?

I’m sure there are many reasons why ACU has had such great success through the years in track and field. Coach Oliver Jackson (’42) planted a great seed in the 1950s with Bobby Morrow (’58) and his three Olympic gold medals and several world record holders in the sprints and relays. After that, ACU became known as a track and field hot spot, and with top coaching and athletes, it’s a title ACU has not given up … I hope it never does.