The most accomplished female track and field athlete in Abilene Christian University history is Delloreen Ennis (’99), who is a volunteer hurdles coach for her alma mater and a recent inductee to the Lone Star Conference Hall of Fame. She and decathlete/pole vaulter Tim Bright (’83) each competed in three Olympics. Ennis comes from the Jamaican galaxy of swift sprinters and hurdlers who have starred on the international stage for years. 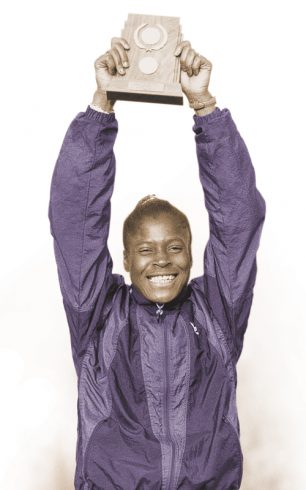 She is the only athlete to win all eight short-hurdle NCAA titles in a career (55 meters indoors and 100 meters outdoors, four times each). Ennis ran on the Wildcats’ championship 4×100 relay teams in 1998 and 1999 to give her 10 career national titles. In 2006, she was named to the NCAA Division II women’s track and field Silver Anniversary Team by the United States Track and Field and Cross Country Coaches’ Association. She still holds the NCAA Division II all-time best in the 100 hurdles (12.71 seconds), was a combined 34-6 in short hurdles races (55 meters, 60 meters and 100 meters) over four years of collegiate competition, and posted wins at the Penn Relays and Texas Relays. She was inducted to the ACU Sports Hall of Fame in October 2009.

Ennis has been one of the top 100-meter hurdlers in the world during her post-ACU career, making three Jamaican Olympic teams and three times earning medals at the IAAF World Championships. Her Olympic record includes finishing fourth in 2000 in Sydney, Australia; falling short of the finals in 2004 in Athens, Greece; and earning fifth in 2008 in Beijing, China. In 2005, she finished second in the world championships, third in 2007 and third again in 2009.

She participated in the Jamaican Olympic Trials this summer, finishing sixth despite running with strained quad muscle. At age 37, she is planning for one more year of competition.

How did you get started competing in track and field in Jamaica?

I started out running track in primary school back in Jamaica, and at the time it was more as a fun experience. After graduating from primary school, I went to St. Jago High School. That’s when my true love for track began because I was known to be a strong and fast athlete and when I raced, I would always win. But in the sprints in Jamaica after a while it starts to get competitive, so one day in training my coach asked me to try the hurdles, and I did.

What is the story behind you choosing to enroll at ACU?

My last year in high school, coach Wes Kittley (’81) and my monitor – a person who was like a second father to me – were very good friends, and they talked a good bit about me. I told coach Kittley I would be more than honored to come to ACU. 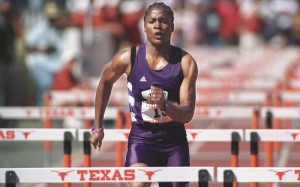 What made you choose the 100-meter hurdles as a specialty, rather than the sprints or some other event?

It makes you feel like you are flying, and I just love it.

Which coaches at ACU have had the most influence on your success, and why?

Honestly, I cannot choose one because each one – Wes, Kelly Smith (’84) and Chelsa (Lancaster ’95) Istre – all saw to it that I stayed motivated, focused and most of all, that my school work was intact. So to all three, I have to say a big “thank you” for their love and support.

How do you describe the Olympic experience for an athlete to someone who has never been done that?

It is something you cannot really put into words. You would have to be there to understand the whole togetherness of every country coming together as one, despite the fact that we all have a job to get done: representing each of our countries 100 percent.

Which were your favorite Olympics, and why?

I don’t really have a favorite Olympics because each one is different in its own unique way. But I would have to single out my first one in Sydney, Australia, where I finished fourth in the finals. That was huge to me: going there not knowing what to expect and then doing that well was amazing for me.

Why does Jamaica produce such outstanding sprinters and hurdlers?

I honestly don’t think we have anything super that makes us the best. We train very hard, we are dedicated and we have strong minds. Having year-round tropical weather in which to train along the hills and beaches is a big benefit, plus we are strict about only eating organic foods.

What are your competitive plans for the future?

At the moment, I am resting and will give it another try next year, and then retire.

What makes ACU track and field such a successful program, and an attraction to top athletes, especially from other countries?

Our coaches recruit well and our athletes are dedicated. Everyone works together to attain one goal: winning championships. What attracts student-athletes to ACU is simple: they want to attend a school where champions are made. That has always been our tradition.