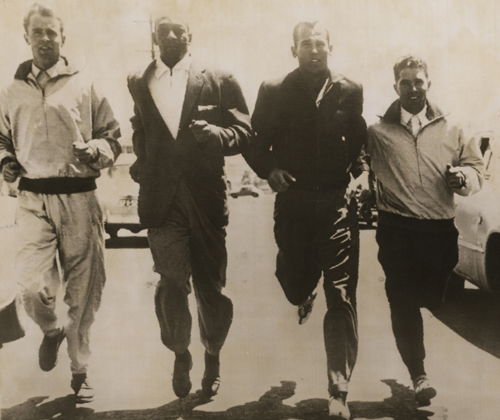 We discovered this rare photograph recently and were amazed at the history it represented.

The Olympic Games, for as hard as they work to give sport a venue to overcome politics and international discord, are often prime showcases for them. The Olympic spirit, however, seems to largely find a way to overcome dissension and restore camaraderie not otherwise possible. In the International Olympic Committee’s 103-page Olympic Charter, one of the seven fundamental principles of what it calls “Olympism” is:

“The practice of sport is a human right. Every individual must have the possibility of practicing sport, without discrimination of any kind and in the Olympic spirit, which requires mutual understanding with a spirit of friendship, solidarity and fair play.”

Shot near the Olympic Village in Melbourne, Australia, on Nov. 19, 1956, this photograph showed German sprint champions Manfred Germar (left) and Heinz Futterer (right) jogging with 1936 Olympic hero Jesse Owens (second from left) and Abilene Christian University sophomore Bobby Morrow (’58). While Germar and Fütterer would go on to win bronze medals in those 1956 Olympic Games in the 4×100 relay, Morrow would win three gold medals (100, 200 and 4×100 relay), the most by an American since Owens won four (100, 200, 4×100 relay and long jump) in the 1936 Games in Berlin.

Owens, one of the United States’ best athletes ever, was a central figure in the 1936 Games, when German leader Adolph Hitler did his best to use the stage as a showcase for his rising world influence. The Nazi Party had come to power during national elections in 1932 and took over officially in early 1933. By the time the International Olympic Committee (IOC) allowed the Games to begin in Berlin on Aug. 6, 1936, Nazi flags flew everywhere, and in the Opening Ceremonies, it was hard to tell whether the athletes and spectators were performing the Olympic salute or the Nazi salute among the sea of outstretched right arms. It was an eerie scene, with a smiling Hitler presiding over the festivities.

Although he violated the Olympic Charter in doing so, Hitler banned Germans with Jewish roots from competing, although one – Helene Mayer – was allowed. Otherwise, Germany’s self-proclaimed Aryan master race was on display, and the host country won the most medals overall (the U.S. was second). Still, 13 medals were won by African-American men, led by Owens, who was the grandson of a slave.

The U.S. was urged by many to boycott the Games because of the Nazi-influenced German government, but decided to participate after American Olympic Committee president Avery Brundage made a personal trip to Berlin, where Hitler convinced him that Germany would not discriminate against its athletes of Jewish descent.

The only two Jewish members of the U.S. team, Marty Glickman and Sam Stoller, were pulled from the 4×100 relay the day of their competition, which incensed those who believed anti-Semitism was at work. Ironically, the next two Summer Olympics – 1940 and 1944 – were cancelled because of World War II, with Hitler’s Germany the leading aggressor. Privately, Hitler declared that after the 1940 games, scheduled to take place in Tokyo, they would return to Berlin and be held there permanently. History would prove otherwise.

Some notable political events/statements at the Summer Olympics:

From 1952-72, Brundage served as the often heavy-handed president of the International Olympic Committee, defending the Olympic movement as one that transcended politics and other matters. He received heavy criticism for initially refusing to postpone or cancel the 1972 Munich Games in the early hours after the terrorist attacks. “… the Games must go on,” said the IOC chief, who was considered by some to be an anti-Semite for comments and actions in his life. Competition stopped 24 hours for a memorial service attended by some 85,000 people, then resumed.