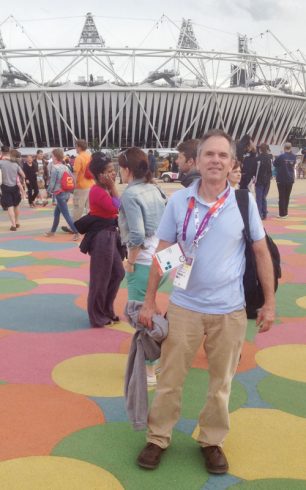 The award-winning writer covers professional and collegiate sports in and around Colorado Springs, the home of the U.S. Olympic Committee and the Olympic Training Center. He also writes for ACU Today magazine when time allows. One of his first experiences last week was accidently crashing one of Paul McCartney’s Opening Ceremony sound checks in Olympic Stadium, and a “Hey, Jude” singalong with the former Beatle and about 400 other people.

We asked him to give you a sense of what life is like for a foreign journalist at the Olympics:

LONDON – I’m sitting in Olympic Park as I type these words. I’m looking out the window, gazing at Olympic Stadium. I’d call it futuristic, but it’s my hope these kind of funky, goofy buildings will not fill our future.

This is my third Summer Olympics, and I’m often asked to describe the experience.

It is exhilarating. It is overwhelming. It is exhausting. It is a return every four years to an existence similar to my life as a student at Abilene Christian University. In my ACU days, I often remained in The Optimist office all night with my friends Doug Mendenhall (’82), Mark Evje (’82) and Kent Barnett (’81). Sleep was just something that got in the way of our fun and work.

It’s the same way at the Olympics. You arise early. You go to bed late. You work until your eyes are blurry, wondering if the words will make sense to anyone.

But it’s not all hard labor. In Athens, I visited the Parthenon every few days. In Beijing, I toured virtually all of the city’s intricate, gorgeous 15thcentury temples and palaces. During breaks in my week in London, I’ve walked through St. Paul’s Church, the Imperial War Museum, Westminster Abbey and watched two plays on The West End. When you stay awake 20 hours a day, you get a lot done.

Mostly, though, it’s about sports. At this Olympics, I plan to cover Greco-Roman wrestling, traditional wrestling, various forms of shooting, table tennis, men’s and women’s basketball, men’s and women’s soccer, the pentathlon, the triathlon, track and field, including the 20k and 50k race walk, gymnastics and fencing. And, yes, I’m a proud survivor of Danny Boyle’s sometimes wonderful, sometimes woeful four-hour opening ceremony.

This frantic schedule is typical among my sports-writing colleagues. It sounds improbable, if not quite impossible, to squeeze all that work and travel into two weeks. But the secret of the games is the superlative transportation system. Each host city must find a way to essentially clear their highways for Olympic traffic. An Olympics-only lane winds through every host city.

This can provide some weird moments. In Beijing, I’d be sitting in a bus with dozens of other journalists as we roared by traffic jams that were literally miles long. We were rippling along at 60 miles an hour past drivers who had been sitting there for hours.

In London, I begin my day with a bus ride from my hotel room to Olympic Park. There’s traffic, but not for us. Many of the events are in the Park, but just as many are not. When I depart, I ride in buses that never encounter jams even though I’m in one of the most jam-prone cities of the world. When the day ends deep into the night, I climb on the bus and take a traffic-free ride back to my bed. It’s a surreal experience. It can spoil a person quite quickly.

When I started my journeys to the Games in 2004, I was a skeptic about the Olympic Spirit. No more. There is something special. Every four years, the world gathers to take a break from all its strife to play games. In Athens, in Beijing and now in London, I’ve been surrounded by courtesy and joy and kindness. Virtually everyone in England has been polite and helpful to this often confused, sometimes flat-out lost visitor.

I’ll long remember the police officer who listened to my request for directions last week near London’s lush Hyde Park. Security is always serious at the games. He was holding a black machine gun as he listened.

When I finished, he cradled the machine gun in his left arm while taking out his smartphone with his right hand. He looked up my destination and sent me on my way.