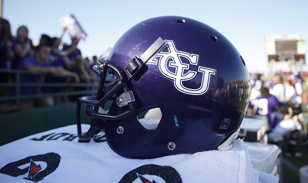 Southland Conference commissioner Tom Burnett said his group of league officials wrapped up what he called a “great” tour of the Abilene Christian University campus today, satisfied that all parties had an excellent opportunity to get to know each other better.
For two days this week, the SLC group toured campus facilities, met with deans and other faculty leaders, athletics staff, student-athletes, trustees, ACU’s Senior Leadership Team, community leaders and local alumni.
ACU is one three universities – along with the University of New Orleans and the University of the Incarnate Word – the SLC is considering for a possible invitation to join the Division I SLC, which competes in football in the FCS (Football Championship Subdivision). The Wildcats were a founding member of the SLC in 1963. UIW, which is located in San Antonio, and ACU are members of the Lone Star Conference and NCAA Division II. UNO had earlier announced intentions to leave Division I for Division II, but has since pledged to remain Division I.
“We’re looking for opportunities to enhance our conference, academically and athletically,” Burnett said, adding that “by being here, we’re making a statement that we are very serious about membership possibilities.”
Burnett said the SLC needs to “make decisions very quickly” so the conference members can make decisions about scheduling and tournaments as early as the 2013-14 academic year, and the new member(s) can begin their transition process with the NCAA. He said the conference would reconvene its board of directors and give them a report of the visit committee’s impressions.
“We are pleased and honored that the Southland group came here. It’s part of the discovery process for both of us,” said ACU president Dr. Phil Schubert (’91). “We wanted to give them a real picture of our university and a great sense of what this place is about, and that means its people.”
Schubert said a two-year campus study of intercollegiate athletics at ACU involved a comprehensive look at Division I and the facilities investments that might be necessary, the added cost of scholarships at the Division I level, and the academic requirements necessary to compete at another level of the NCAA. He said it was no secret that “Division I more closely aligns with our academic standards than does Division II.”
The ACU president said the university was intrigued with what he called “invaluable opportunities” to compete with other Division I universities in the region, especially those in markets where ACU already competes for new students.
“I feel we are in a good position to move forward if we get an invitation. But we don’t want to speculate about what is on the horizon,” said Wildcat athletics director Jared Mosley (’00), adding that whether ACU moves to Division I or stays Division II, “we know ACU has a great athletics tradition.”
The SLC recently invited Oral Roberts University and Houston Baptist University to join its league, which is headquartered in the Dallas suburb of Frisco.
See the ACU sports website for more details. These earlier posts on the ACU Today blog provide background information on the process: ACU Assesses Future of Wildcat Athletics and ACU Among Three Universities in SLC Study.