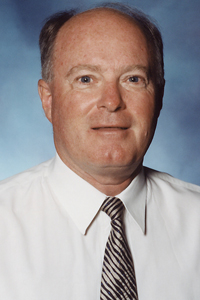 Garner Roberts (’70) likes to joke that between the two of them, he and former NFL All-Pro runningback Wilbert Montgomery (’77) scored 70 touchdowns in their Wildcat careers.

Wilbert, now an assistant coach with the Baltimore Ravens, scored all the TDs and Garner wrote about each of them in his 25-year role as sports information director at ACU. He never scored a TD for the Wildcats, but Garner was honored in 2000 with a Lifetime Achievement Award for his years of support to the university’s athletics program and inducted into the ACU Sports Hall of Fame. (You’ll find Wilbert in there, too.) An award-winning writer, he is a member of the CoSIDA (College Sports Information Directors) Hall of Fame, co-founder of the Big Country Soccer Association, and continues to volunteer in the press box at ACU football games and track and field meets.

Few people – OK, nobody – has a more extensive working knowledge of Abilene Christian sports history than Garner, but many don’t know the extent of his world travels as a press officer for U.S. track and field teams. He has been a fixture in the press crew for nearly every Olympic Trials in that sport since 1980, and had an important role organizing the media covering the 1984 Olympic Games in Los Angeles.

Athletes in the U.S. have to compete in Trials to make an Olympic team. How do other countries determine their competitors?

Few other countries use a qualifying system like the U.S. does where the top three who have met the IOC “A” standard in the qualifying period get the places on the team for the Olympic Games. For example, in the recent USOT in Eugene in the men’s javelin, the top two men were collegiate athletes from Texas A&M University and the University of Oregon who did not have “A” standard marks, so the third, fourth and fifth place athletes got the spots on the USA team.  But in most of the events, it’s the top three who go to London. Athletics officials of many small countries without the depth of athletes in the U.S. arbitrarily name or select their team (usually based on past performances), and some use a combination of selection and trials. There have been instances where a prime minister or head of a country has selected a relative, such as a son, daughter, nephew or niece, to compete in the Olympic Games! (And it’s called “athletics” in most other countries, not “track and field” as we call it here in the U.S.) 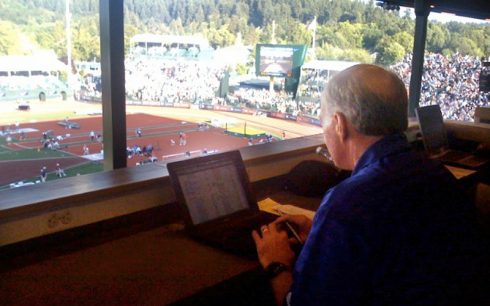 You have worked on track and field press crews on a number of Olympic Trials and at the Olympic Games. Which ones and where?

What other international experience have you had working with U.S. teams?

Most of my international experience came as a media relations officer for U.S. men’s and women’s teams competing in non-Olympic year events such as the IAAF World Championships, World University Games, Pan American Games, Goodwill Games, and other dual, triangular and quadrangular meets. I have attended and worked at track and field competitions in eight nations – U.S., Canada, Mexico, Cuba, Japan, England, Germany and Sweden. Those assignments were primarily done for Indianapolis-based USA Track and Field, the national governing body for the sport.

What was involved in your role as assistant press chief for track and field in Los Angeles?

I was assistant press chief for events at the Los Angeles Coliseum – track and field and opening and closing ceremonies for the LAOOC. I traveled to L.A. in advance and helped set up the venue, then basically the task was to aid the media in doing their job of covering the events. We provided results, facilitated interviews (formal interviews and one-on-one interviews), and served as marshals to ensure that writers and photographers remained in their appropriate areas. I primarily moderated formal interviews with top athletes and medal winners and also worked in what is called the “mixed zone” – an area that writers have access to through which athletes exit the stadium – facilitating the one-on-one personal interviews. I spent a total of 50 days in L.A. that summer.

What made the 1984 L.A. Olympics experience memorable for you?

I think because it was my first Olympic Games, obviously. I already had some international experience by then so that part was not new.  But nothing as monumental as the Olympic Games. And there were several ACU athletes, including decathlete Tim Bright (’83), competing so I enjoyed watching and talking to them.  And to attend an event at the historic Los Angeles Coliseum was certainly a thrill in itself. The track has since been removed to make way for more seats for football games so sadly no more track and field in the L.A. Coliseum.

What are some of the most memorable performances you’ve seen at the Trials or Games, and why?

It is always exciting to witness an ACU athlete – a person you know and most often are friends with – make the Olympic team and to share in their exhilaration. So those moments in 1984 (Tim Bright), 1988 (Bright and Billy Olson), 1992 (Bright and Mark Witherspoon) and 2000 (Eric Thomas) were special. And most of the time I got to write about them. Several of the world records I have been fortunate to see came in the USOT, including Ashton Eaton’s unbelievable 9,039 in the decathlon recently in Eugene. Those performances and the atmosphere among the fans in the stadium are amazing. One of the most impressive athletic performances I have seen at the USOT came July 21, 1988, in Indianapolis by Bright. The second day of the decathlon – which includes the pole vault – and the finals of the open pole vault occurred on the same day (the vault final had been postponed from a day earlier because of rain). Bright finished second in the decathlon to make his second Olympic team (with an American decathlon record 5.60m/18’4.5” in the vault) and then finished fourth (on fewer misses) behind teammate Olson (’81) in the open vault. Both cleared 18’8” – Olson on his first attempt to make his first Olympic team at the age of 30 years and Bright on his third attempt. Bright made more than 20 trips down the vault runway that day in a sensational display of athletic ability to earn a spot in the Olympic Games decathlon and the alternate’s spot for the U.S. in the pole vault.

What would you want people to know about the Olympics that they can’t sense by watching on TV?

I think television is continually improving its presentation of track and field, but it’s difficult to satisfy all the viewers. For me personally, I wish they would show more events and more of the events. Track and field includes so much more than the 100, 1500, jumps, shot put and a few other “glamour” events on which they choose to focus. They are moving toward this with their use of cable and their affiliated networks to give them more time to show more competition. But many times they select events to present even before the competition starts. Although I am probably in the minority, I like to see more competition and fewer “features” and “up close” segments.

The women’s U.S. Olympic Trials for track and field were once held at ACU. What do you know about it?

The U.S. Olympic Trials for women were held at Gray Stadium on the ACU campus July 15-16, 1960, with Wildcat head coach Oliver Jackson (’42) as meet director. From what I’ve read, it was a real community effort by the city to produce a quality event. It, of course, was the Trials where the great sprinter Wilma Rudolph qualified for her second U.S. Olympic team (she won a bronze medal on the relay in 1956 in Melbourne as a 16-year-old girl) with her grace, speed and power. She equaled the American record of 11.5 in the 100 meters in Abilene and went on to win the gold medal in Rome. And she also won the 200 in Abilene and in Rome and anchored the 4×100 relay team to an Olympic victory. Her story of overcoming polio, pneumonia, scarlet fever and other obstacles as a child continues to inspire people even today.

What is your favorite event in track and field to watch, and why?

I don’t know that I have a reason to point to, but when forced to answer this question I usually say the 400 and 800 meters. Long enough for strategy and tactics to develop and watch materialize, but not too long to get distracted. To me it’s astonishing that men can run a half-mile in 101 seconds (the world record in the 800 is 1:41.01). Think about it. And because of the tradition at ACU, I enjoy watching the pole vault.

And the best press box food while working at high school, college and professional sports events?

Wow, such difficult questions! Unlike many others in this profession, I’m not one to personally place a high priority on press box food so my memory here fails me. And I go more for dessert – so that means in 1990 at the U.S. championships in the L.A. suburb of Norwalk, Calif., when the city of New Orleans was lobbying to get the 1992 Olympic Trials, they were giving away pints of Ben and Jerry’s ice cream. Needless to say, I stopped often at their booth and ate more than my share of Cherry Garcia. (And you’ll notice in an answer to an earlier question they were successful in getting the Trials!) But the best press box food? I will have to say that sandwiches made with my wife’s (Linda ’68) homemade bread early in my career in the 1970s in the press box at Shotwell Stadium and the steaks served in the hospitality tent at the Big 12 track and field championships in Lubbock in 2009. And another related memory etched in my memory is standing in line for the dinner buffet at the 1991 IAAF World Championships in Tokyo at the athletes village between the great (East) German long jumper Heike Drechsler, two-time gold medalist and former world record holder, and the great Algerian miler Noureddine Morceli, who won Olympic and IAAF world titles in the 1500. I enjoyed asking friends, “Guess who I had dinner with last night?”