The full-color postcard, with a hand-tinted photo-illustration of London’s Buckingham Palace on one side and addressed to “Mr. Robert Hunter, Abilene Christian College, Abilene, Texas USA” on the other, said a lot in just a few handwritten words in 1960:

“Dear Bob, Hope you can read this (the bus is bouncin’). Am now in route to Helsinki … Dublin, Glasgow. Should be home on the 26th. Until then, Earl.” 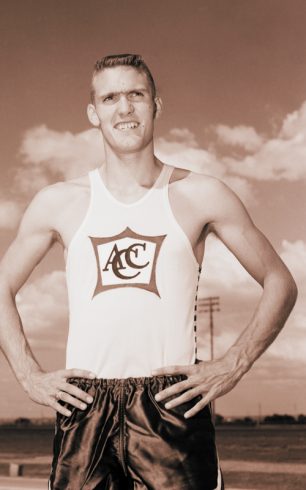 In the mid-1950s and 1960s, one sure way to see the world was to be one of coach Oliver Jackson’s record-setting runners for Abilene Christian University. Earl Young (’62) certainly was one, having won an Olympic gold medal in 1960 in Rome at age 19 as the youngest member of the U.S. track and field team. Four years earlier, another sophomore, Bobby Morrow (’58), won three gold medals in Melbourne, Australia, another considerable distance from the plains of West Texas.

Brazil, Switzerland, Scotland, Germany, Sweden, England – over the next several years, Young turned his Olympic gold into a well-marked passport, and decades later, a business career with extensive international experience.

Jackson (’42) had an almost unfair recruiting advantage when he brought Olympic hero Morrow with him on a recruiting trip to Young’s home in San Fernando, Calif., in 1958 when the tall, long-striding Young was a high schooler with potential envisioned by the legendary Wildcat coach. Young accepted Jackson’s invitation to come to Abilene, where he was named the captain of the freshman team. “He has the ability to become the greatest quarter man in the history of our school,” said Jackson in 1959. And he did.

Young’s 1600-meter-relay team set an Olympic and world record of 3:02.2 in Rome, and he placed sixth in the 400-meter-dash. His parents, Verdelle and Fern, were on hand to see him make history, as was Jackson. After a four-meet, post-Olympics tour of Europe with his teammates, Young arrived back in Abilene to a hero’s welcome and a banquet in his honor in Catchings Cafeteria.

Over the next few years, Young would be a part of three other world records: a U.S. mile relay team, an ACU 800-meter relay team, and the indoor 500-meter dash. He was on the cover of Sports Illustrated magazine in June 1961, and won a silver medal in the 400-meter-dash at the Pan American Games in Sao Paulo, Brazil. He was a member of American national teams (U.S. vs. Russia in Moscow, U.S. vs. Poland in Warsaw and in the British Commonwealth Games), and was twice named Mr. ACU by his classmates (1961 and 1962). Young was inducted to the ACU Sports Hall of Fame in 1989.

In 1996, Young was honored to be an Olympic torchbearer at age 55, running through the streets of DeSoto, a suburb of Dallas. “Half a mile was long enough,” he laughed.