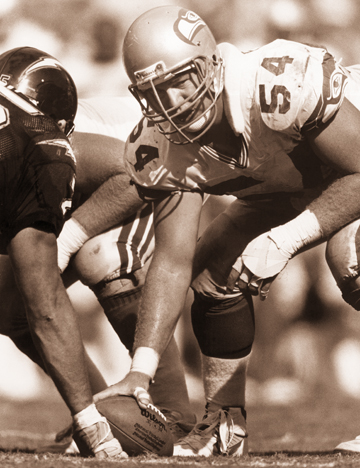 A memorial service will be held at 1:30 p.m. Friday at Legacy Church of Christ in North Richland Hills for Grant Feasel (’83), a first-team all-America center for Abilene Christian University who played eight years in the NFL. He died Sunday in Fort Worth at age 52.
Feasel was selected by the Baltimore Colts in the sixth round of the 1983 NFL Draft, and went on to play with the Minnesota Vikings and Seattle Seahawks. He was the recipient of a prestigious NCAA Post-Graduate Scholarship in 1982, and was named to the NCAA Division II Team of the Quarter Century. Feasel was inducted with the 1994-95 class of the ACU Sports Hall of Fame, and was voted to the Lone Star Conference Team of the Decade for the 1980s.
Family and friends established a scholarship in his honor in 1994, which is awarded annually to a Wildcat lineman.
His brother, Greg Feasel (’81), played for the NFL’s Green Bay Packers and San Diego Chargers, and is now executive vice president and chief operating officer for the Colorado Rockies Baseball Club.
The family requests that in lieu of flowers, memorials be made to the Grant Feasel Endowed Scholarship fund at ACU.