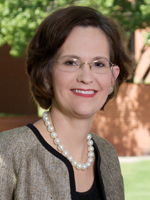 Abilene Christian University has announced the appointment of Allison Garrett, J.D., as executive vice president.
Beginning Aug. 20, Garrett – the senior vice president for academic affairs at Oklahoma Christian University – will fill the ACU position previously held by Dr. Phil Schubert (’91) before he transitioned into the role of president in 2010.
Her ACU responsibilities will include Financial Operations, Enrollment, Marketing, and Facilities and Campus Management (including landscape and grounds, physical resources and construction). She also will serve on the Senior Leadership Team and as a key liaison to the Board of Trustees.
Since 2007, Garrett has overseen OCU’s three colleges, graduate studies, the registrar’s office, international programs, Honors, the student success program, the library, Institutional Research, and faculty technical support group. Previously, she was an executive with Walmart Stores Inc. for more than a decade, and served on the faculty of the Faulkner University College of Law. She earned a bachelor’s degree from OCU and has law degrees from the University of Tulsa and Georgetown University.
She and her husband, Chip, have three children: Ethan (21), Tori (16) and Noah (13). Garrett is a speaker at women’s events on a regular basis and she is board co-chair of the National Ovarian Cancer Coalition.