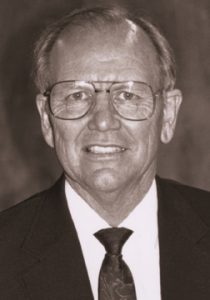 Dr. Dwain Hart, one of Abilene Christian University’s most respected academic administrators and athletics coaches for more than four decades, died early today in Abilene at age 80 after a battle with cancer.
A native of Calvert, Texas, he was inducted into the 2003-04 class of the ACU Sports Hall of Fame after 16 seasons as head tennis coach (with a record of 168-101-5).
During an ACU career that began in 1955, the versatile Hart also was professor and chair of ACU’ Department of Health, Physical Education and Recreation (now known as the Department of Kinesiology and Nutrition) for more than 20 years, a role he held while serving as the director of women’s athletics.
Later, he was dean of the College of Professional Studies, the Graduate School and the College of Arts and Sciences. He was named vice president for academic affairs in 1991 and provost in 1995. Hart retired in 1997 as provost emeritus.
“He was one of the finest Christian men I have ever known,” said chancellor Dr. Royce Money (’64). “For most of Dwain’s life, he was connected in some way to ACU. His influence was far-reaching, from the classroom where he taught, to the administrative positions he occupied through the years, and to his constant support for every dimension of ACU. Dwain’s integrity and his Christian character were evident in every conversation. ACU has forever been changed by this good man, and we mourn his passing.”
“Dwain was the most important figure in the history of our department,” said Dr. Joe Bell (’77), associate professor and chair of kinesiology and nutrition. “Dwain was the first official chair when our department became an independent academic unit. He was a pioneer in the area of physical education teacher education and mentored many who are still active in the field today. He also was dedicated to Special Olympics and started the first Special Olympics track meet in Texas. We owe a tremendous debt to him for serving as our advisor, mentor and supporter for many years. He still came around from time to time to encourage us and stayed connected to us to the very end. We will really miss him.”
Hart earned an associate’s degree from Clifton Junior College (1950), bachelor’s and master’s degrees in physical education from Baylor University (both in 1952), and a doctorate in education from Baylor (1962).
He married Bettie McKnight May 28, 1954. They have three children: Kem (Hart ’80) Hatch, Kent Hart (’82) and Dr. Kerri Hart (’86). Hart was a longtime elder at Abilene’s Hillcrest Church of Christ.
A Celebration of Life service is scheduled for 2 p.m. Saturday, July 7, at Hillcrest Church of Christ. A visitation will be held Friday evening at Piersall-Benton Funeral Directors (733 Butternut St.) from 6-8 p.m.