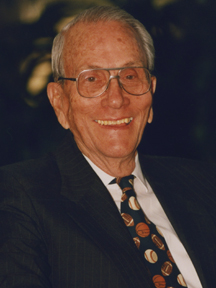 Civic and church leader Wyllis Leon Reese (’41), who was inducted to the Abilene Christian University Sports Hall of Fame in 1996, died June 28 at age 92. His memorial service was yesterday in Abilene.

Long after his own athletics exploits were over as an Abilene Christian University basketball star – he pioneered the one-hand jump shot and free throw while earning all-Texas Conference honors – Reese’s voice was associated with Wildcat sports. He began serving as public address announcer at track meets during the Bobby Morrow era at Elmer Gray Stadium in the 1950s, and for more than four decades at ACU football and basketball games. When legendary sprinter Wilma Rudolph competed at Gray Stadium in the 1960 U.S. Olympic Trials for women in track and field, Reese was behind the microphone.
He married Iris Muns (’43) June 7, 1941, and she preceded him in death Oct. 29, 2011, after 70 years of marriage.
Reese was a longtime elder at University Church of Christ, charter president of two local Kiwanis clubs, and a leader on the ACU Advisory Board for 36 years.
Among survivors are three sons: Randy Reese (’69), Dr. Jack Reese (’73) and Jim Reese (’76); nine grandchildren; and 17 grandchildren.