Graphic designer Jeff Rogers (’02) was recently featured in a national TV commercial for McDonald’s. In it, his handmade typography was the centerpiece of a creative concept by ad agency DDB Chicago. Rogers also contributed to graphics on a website and a print ad. 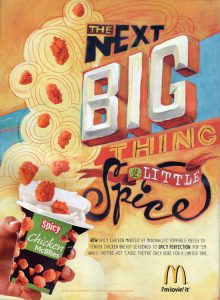 Rogers began his own design company in 2010 after working for SpotCo, an agency specializing in design for Broadway theatre. He is married to actor Allison (Seibert ’02) Rogers and they live in New York City.

How did the McDonald’s commercial opportunity – and art for their ad and website – come about?

I’m diligent about putting my work online and it often gets picked up by various design sites around the Web. It’s my main marketing tool. The people at DDB Chicago had seen a project I had done for the Ace Hotel here in New York City a while back that the Ace featured on its blog. This happened a while ago and they said that they pulled my work and have always wanted a chance to work with me but hadn’t found the right opportunity until the idea for this campaign came up which included the commercial, a print ad and a little Web feature. They presented my work to McDonald’s a day after they called me to tell me about the idea, and I found out that they liked my work and wanted to move forward. I was super excited. 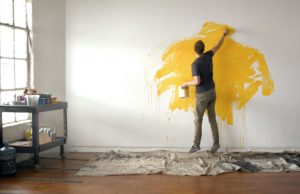 Where was the TV spot filmed?

In a cool industrial loft space near downtown Los Angeles.

What would you want people to know about doing this commercial that they otherwise would never know?

It was a completely unique experience for me for many reasons, but something that was shocking to me was just how many people are involved in a project like this.

From directors to production people to make-up artists and set designers … lighting designers, writers and people who are just there to lift heavy things (at one point, two guys lifted and moved a couch while I was still laying on it. They told me not to get up. It was pretty fun) … it was crazy to see all the people swarming around on set and to meet and work with everyone in the days leading up to the shoot. I felt completely supported even though sometimes it felt like it was all up to me. Everyone was super nice and encouraging. I made a few new friends. I had to keep reminding myself that there were a lot of great minds working to make this awesome, so that helped in the times where the pressure was really on. I’ve been on a ton of big photo shoots with celebrities, etc., as an art director but the film process is completely different, especially being on the other side of the camera. I thought I would be prepared because of my previous experiences but it ended up being completely different. 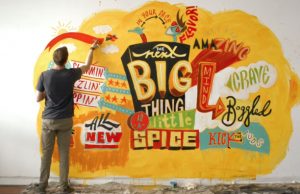 What fuels your interest in typography?

I would say simply my intense desire to make things. It’s always been there. I’m not sure it will always take the form of making typography, but as long as I am making things, I am happy.

What makes the playful, hand-drawn kind – you say you’re a “letterer” – attractive?

I think the handmade lettering style has become popular over the last couple of years because it’s a stark contrast to all the slick, over-produced imagery we are inundated with every day. It reminds people that a human being made it with their hands and that connects a person to what they are looking at in a different way than a slick movie poster does. I’m just glad I can be a small part of this movement in design history. Handmade lettering has always existed in one form or another but it seems like it’s pretty popular right now. I’ll ride the wave as long as I can. 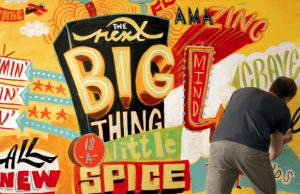 You wrestled with a music career before deciding on graphic design. Can they not co-exist, or do they still make room for one another?

I wouldn’t say I wrestled with it as much as it was something to do when I graduated from college to give myself a breather. An opportunity presented itself to go on tour with ACU’s own Aaron Watson (’00), so I did it knowing I would eventually get a job in design. I have always played music and still make it a big part of my life. I need it to make me a better designer. For me, they need each other. Music is as much a form of self expression as making imagery or designing but it’s a different language. A person who is multilingual can experience the world and express themselves in a much deeper way than a person who can only speak one language. I keep playing music to inspire and inform my visual language and vice versa. 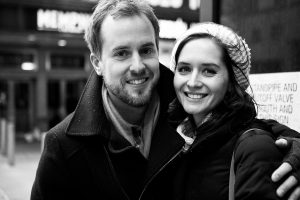 What attracted and keeps you and Allison in New York City?

There are so many opportunities in both of our fields. This is the top. We came here with a desire to reach our full potential, knowing full well that this crazy town could chew us up and spit us out. And it still can at any minute. But right now, we’re pals. Some of the greatest thinkers in both of our fields are here in this city and the chance to work alongside them and learn from them is extremely valuable.

What do you miss most about Texas?

Tex-Mex. HA! Second only to our amazing families who we come home to see as often as we can. 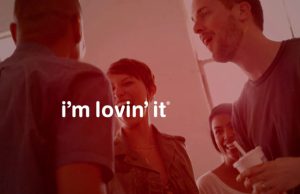 Your wife is an actor, yet you land a spot on a national TV commercial. Are you difficult to live with these days?

NO WAY! Well … she might hate me just a little. HA! But she is very proud of me and is my No. 1 supporter. But she has a huge show (the New York City premiere of Giant) coming up at one of the most prestigious theaters in the world (The Public Theater), so she’s doing just fine. My little commercial doesn’t make too much of a difference. She is a powerhouse and is doing amazing things in this city. She astounds and inspires me every day.

I hope not! I’ll stick to vegetables … and coffee.