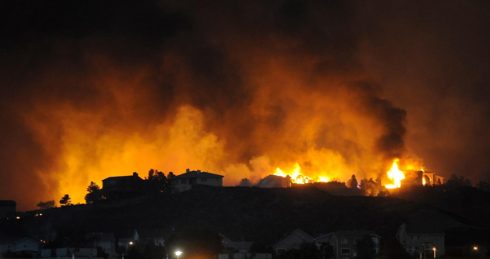 ACU Today contributing writer David Ramsey (’81) has had a closer look at Colorado Springs’ Waldo Canyon Fire than most veteran news journalists would like.
It’s been staring down his hometown this week.
The award-winning sports columnist for the Colorado Springs Gazette has been pressed this week into duty as a reporter helping with coverage of the state’s worst wildfire on record. Ramsey lives across Interstate 25 from the sometimes apocalyptic scene developing since Sunday in the foothills of and neighborhoods where people live in the southern Rocky Mountains.
Ramsey says this afternoon:

For a few hours on Tuesday night, the Waldo Canyon Fire looked as if it would consume a large percentage of Colorado Springs. The winds were at 65 mph, and the fires were moving rapidly. The damage was horrifying, but it could have been much worse.
I was standing along with my son, Luke (13) on a high perch on the city’s East Side, watching as the fire moved through the West Side. It’s a moment I will long remember.
Our church, the Eastside Church of Christ, has fed and sheltered a few families who were forced to evacuate. It’s been an exhausting week, but it appears the worst has passed.

More than 32,000 people remain evacuated from their homes, and the fire has burned more than 18,500 acres and hundreds of houses thus far. Thunderstorms in the area this afternoon have the potential to add much-need moisture to aid the efforts of 1,000 fire fighters in the area.
In a Gazette column this afternoon, Ramsey writes about the answered and unanswered prayers of people whose lives have been forever altered by the raging fires.
Among the Gazette’s coverage is a poignant narrative essay written by staffer Bill Vogrin, who was among those evacuated this week. Many thanks to the Gazette and photographer Jerilee Bennett for use of this image, which she shot Tuesday night.
More than 100 Abilene Christian University alumni live in Colorado Springs; please share information with us about how you/they are faring.