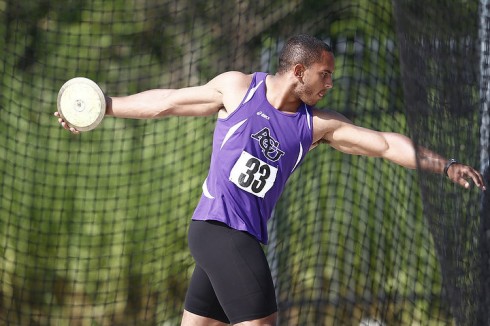 Nick Jones, the Abilene Christian University strongman who is competing in two events at the United States Olympic Trials this weekend and early next week, will be featured today on “CBS Sports Presents Championships of the NCAA” at 1 p.m. CST.
Jones is one of two ACU track and field standouts who qualified to compete at the Trials at historic Hayward Field in Eugene, Ore. His teammate, LeVance Williams, competed in the long jump event last night and finished 14th with a top mark of 7.61 meters. Only four U.S. collegians finished above him. William Claye won the event with a jump of 7.98 meters.
A 10-time all-America performer, Jones qualified for the Trials in two events: shot put and discus. Shot put competition begins today at 5 p.m. CST and discus begins Monday at 5:30 p.m. CST. Last month, Jones became the first man in NCAA history to win the national discus title four straight years. A senior, he was part of three Wildcat teams to win NCAA national championships.
The top three finishers in each event of the Trials will compete for the U.S. later this summer in the Olympic Games in London, England.