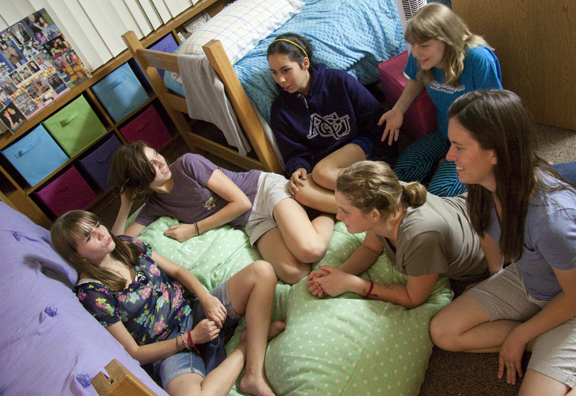 Deana (Hamby ’93) Nall continues her week-long series of posts about her family’s three-generation tradition of attending, working or volunteering at ACU Leadership Camps. She and her husband, Chad (’94), and daughters Julia and Jenna, are helping with MPulse camp.

When you hear someone say, “I volunteer at a camp for middle-schoolers,” you may have images of that person slaving away in some outdated mess-hall kitchen, or beheading snakes with garden tools, or making lanyards until their eyes cross, or trying to sleep on the bottom bunk directly below that kid who is a known bed-wetter, or consoling a weeping sixth-grade girl because what’s-his-name, who she swears she will always love despite the fact that she will never see him again after Saturday, didn’t ask her to be his date to the campfire.
I know. I’ve been to those camps.
MPulse volunteers don’t do these things. So how do we spend our days at camp? I’m glad you asked.
7 a.m. or so – Wake up. I say “or so” because even though the MPulse campers hop out of their beds and run to their first activity at 8:15 a.m., we group leaders aren’t needed until later in the morning. We might go running around the Lunsford Foundation Trail, goof around on Facebook for a while, or go over the day’s lessons. I personally prefer a casual combination of those three.
8:30 a.m. – Breakfast in the World Famous Bean. Campers come in at 8:45, so we group leaders try to beat the crowd. A word about the Bean. I understand the culinary reputation of this storied establishment has not always been stellar. If you were a student at ACU during one of those times, I have something to tell you: The Bean is good now. I mean it. And, because of an extensive remodel several years ago, it looks good, too. Besides, Chad and I met in the Bean in Fall 1990. So not only do we think the food is good, we find the atmosphere rather romantic. Even with gobs of middle-schoolers around.
10:15 a.m. – Chad and I like to get squared away on the day’s lessons with the other people leading our group. You don’t want to be unprepared in front of a group of these kids, because they are ridiculously bright. One kid in our group this year is fluent in three languages. I only know two: English and Texan.
10:45 a.m. – Things are about to kick into high gear and stay there for several hours. All the MPulse group leaders meet with camp director Dr. Bob Strader (’76), who gives us invaluable information for the day. This can include logistical issues such as changes to the schedule, as well as pointers on guiding our campers through the lesson for the day. We eat doughnuts, pray for our campers, and head out to greet the masses.
11:30 a.m. – We file with the campers into Hart Auditorium, where we watch a movie. Not just any movie, though – one that helps drive home the point of the week. We watch a little every day, and Bob makes sure to shut off the movie right when something heart-stopping is happening. The campers love that.
12:30 p.m. – Back to the Bean for lunch. Because campers and leaders alike hit the Bean at once, it’s crazy in there. It’s a great opportunity to sit with our campers and get to know them better. You can learn a lot about someone by eating with them. One kid in our group this week downed four hamburgers in one sitting. This tells me that he has an intense personality, and that he embraces all life has to offer with a passion. Or he could have just been very hungry.
1:15 p.m. – To the classroom with our group of campers. This is when we really get into the Bible and try to get the kids to grasp some concepts that may be new to them. This year, we’re talking about being Christ’s ambassadors to the world, which means we leaders have the challenge of getting middle-schoolers to think outside themselves. We’ve spent a lot of time in II Corinthians 4, where Paul talks about treasures in jars of clay. This week, our kids wrote their names on clay pots and filled them with rocks. On the rocks they had written their “treasures” – the things that really matter to them. MPulse – and all the Leadership Camps, for that matter – are big on not just teaching, but showing.
2:45 p.m. – Leadership Challenge! We head to Gym D in the new Royce and Pam Money Student Recreation and Wellness Center for fun, chaotic games, followed by another tie-in to the week’s theme. Photos of orphans flash across the screen along with statistics about the children in the world who are parentless. “Why does God care so much about orphans?” the campers are asked. “How can we, where we are right now, be ambassadors to these kids?” We don’t provide answers; we let the kids talk it out. Again, showing and not simply telling.
3:30 p.m. – Free time for the campers, which means nap time for us. Yay!
5:30 p.m. – More Bean food. Really, it’s good now.
7:45 p.m. – Reflection and prayer time with our campers.
8:45 p.m. – Devotional in the Beauchamp Amphitheatre. The sun is setting, the wind cools, and we sing. I was among the first campers to have a devo when the Onstead-Packer Biblical Studies Building was first built, and all these years later, it never gets old.
9:30 p.m. – The campers head back to their dorms while Chad, Jenna and I take a detour to Dairy Queen (those are not easy to find in our part of Arkansas), then back to the dorm to bed. Tomorrow we’re doing it all again.
In tomorrow’s post, I’ll wind down our week and share more about my dad, Winston Hamby (’57), and why he loved Leadership Camps.
WEDNESDAY – Camp Confessions: Julia’s view
TUESDAY – Camp Confessions: I love middle-schoolers
MONDAY – Camp Confessions: We’re baaaaaaack!
SUNDAY – Camp Confessions: It’s all in the (Nall) family
PREVIOUS POST   NEXT POST
SHARE: