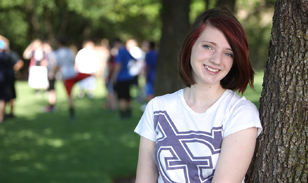 Deana (Hamby ’93) Nall continues her week-long series of posts about her family’s three-generation tradition of attending, working or volunteering at ACU Leadership Camps. She and her husband, Chad (’94), and daughters Julia and Jenna, are helping with MPulse camp. Today, Julia offers her own perspective.

We first brought Julia to ACU Leadership Camps when she was 6 months old. For the next several years, she went to camp childcare while Chad and I worked as group leaders at Kadesh. Once she was old enough for camp, she attended KidQuest, Learning to Lead, and now MPulse. Basically, Julia has come to Leadership Camps every summer of her life. Today, she is sharing her perspective on growing up at camp:

I’m a 13-year-old who has been attending camp for, well, 13 years. Not necessarily “camp,” because anybody who directs a camp for infants is completely lacking in any form of sanity.
Then again, to direct any camp, I think you need to be a bit insane. 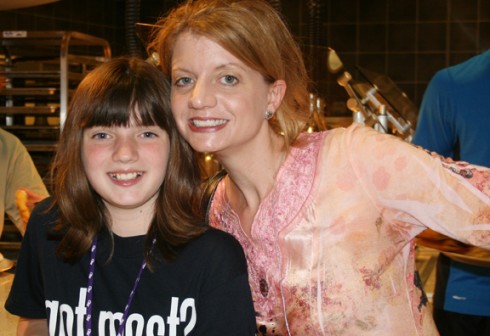 If not actually enrolled in the camp, as that wasn’t possible for the first half of my life, I spent my time creating extensive Lego sets with fellow parents-are-Kadesh-leaders kids like me. The babysitters were great, and pretty much the highlight of the year for me was getting to go to the Abilene Zoo with them while my parents were working at camp. We’d stand on a bridge and feed the giraffes, watching the purple-blue tongues loll out of their mouths to lick up whatever they gave us to feed to them. To 4, 5, and 6-year-old me, being at the same height as these strange long-necked creatures was amazing. Since then, my tastes have changed and my iPod has replaced Legos (But I won’t deny that I still would love some more of those building blocks; Legos are legit.), but something that hasn’t changed is that unmovable force in my summers: knowing I will go to Abilene for Leadership Camps.
For the past eight years, I’ve been old enough to actually attend camp instead of letting giraffes lick my hand. It really takes a special something to make a girl that lives pretty far away (and could access closer camps much more easily) come back, again and again. And I do plan on coming back next year, and after that, and again after that, until I go to college, which will probably be at ACU. And I hope I can even put in some more camp time as a counselor someday.
KidQuest, for those of you who are unfamiliar with it, is the camp session for the youngest age groups. It is here that first- through third-graders have pretty much the most fun ever. Everybody who works KidQuest is so energetic. I’d need to consume something like 30 cases of Red Bull to even get close to the amount of energy the people have here. They do this thing when you walk in the big room at the beginning of the day. They yell your name and color group and everybody cheers like you’re a movie star. Every single person at KidQuest is so happy and energetic, and you know that day is going to be really, really awesome.
Learning to Lead is the camp for fourth- through sixth-graders. You are part of a group where you do a Bible study every day. You don’t get arts and crafts time anymore, but you still sometimes get to sing silly songs, and that makes it OK. Learning to Lead is fun and also just the right balance between fun and in-depth stuff, which is great for older elementary school kids. 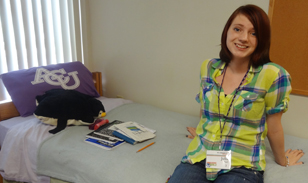 MPulse is the camp I currently attend. It’s for seventh- through ninth-graders and this is my second year. It has been amazing so far, and I doubt that it will stop being amazing. You start to get a lot more in-depth in your Bible studies, and you watch an awesome movie every year that relates to the theme. And, of course, every once in a while, you get to sing silly songs. Silly songs never get old.
Here’s the irony of it all: my family moved away from Abilene in 2000, to the Houston area. And from Houston to Little Rock. We keep getting further and further away, but Abilene keeps sucking us back in. Like a black hole, but a good one.
I’ll keep returning to ACU Leadership Camps, and enjoy every second of it. Whether it is yoga during Everfit, or surprisingly good food in the Bean, or completely great discussions in color groups, I love activities at camp. I’ll see friends I recognize who are also drawn to the camps, like I am, year after year. I’d recommend it to anyone.