This begins a series of posts over the next six days about the Leadership Camps that make an otherwise slightly sleepy university campus each summer ring with the sounds of young people having the time of their lives. This is the 30th year for Abilene Christian University to host a series of camps (KidQuest Day Camp, Learning to Lead, MPulse, Kadesh, and Cross Training) with the help of a small army of staff and volunteers. The best person we know to write about all this is Deana (Hamby ’93) Nall of Bryant, Ark., whose family tradition of attending or working at Leadership Camps is legendary, as you will learn. Deana has written for ACU Today magazine as a freelancer for 19 years.
This morning, my husband Chad (’94), our daughters Julia and Jenna and I loaded the car at an obscenely early hour and headed west on I-30 out of our small Little Rock suburb. Many of our friends go on cruises or to beach condos when school gets out. What do the Nalls do? We go to West Texas during the hottest part of the year. And we love it.


Our involvement in ACU Leadership Camps started in 1988, when I was a junior in high school. One day, my dad, Winston Hamby (’57), who also was my youth minister, asked me, “Would you like to go check out a camp for me?”
Dad had heard about the camps that had been going on at ACU for a few years, and he wanted me to scout them.
No one else from my church was going, so I would have to hitch a ride to Abilene with a youth group from a neighboring town. I knew we would be staying in the dorms, so I figured it would be like college without having to go to class. Sounded like fun. Dad signed me up.
July came, I made the trip to Kadesh (the camp for high-schoolers) with the other youth group, and I moved into my room in Gardner Hall. My main concerns were how my hair would fare in the dry West Texas heat and wind, and how many cute boys I might meet that week.
As the week progressed, my hair and the boys faded into the background. This camp was different. Missing were elements I had known well from my previous church camp experience: lectures against hand-holding, rock music and mixed swimming. Instead, the leaders at Kadesh possessed a passion and uninhibited joy about following Christ that I had never witnessed.
I had also never witnessed anything like Reg Cox.
Reg (’84) was one of the camp leaders at the time, and he spoke at most of our gatherings. When he talked to us, his face turned crimson and veins popped out of his neck. I had only seen preachers look that way when they were railing against the evils of MTV, or why prom was a teenager’s express ticket to hell. But Reg wasn’t angry. He had a love for Jesus that he just could not contain, and he wanted, with every ounce of his being, for us teens to have that kind of love for Jesus, too. 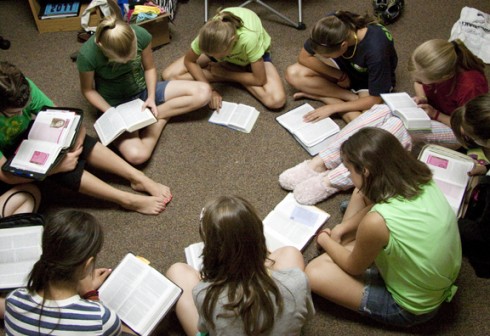 I was mesmerized by this exuberance about following Christ. I hadn’t known being a Christian could be like this. And we did go to class, after all. We spent hours in the Bible every day. I couldn’t take enough of it in. I became sick toward the end of the week, but still forced myself to attend everything. At the last camp devo, I lay on one of the ledges that flank the Hardin Administration Building steps, my head and stomach spinning as I rested my feverish face against the warm concrete. I felt awful. But I did not want to miss a minute.
When I returned home, people asked me, “Did you have fun?” Well, of course I did. It was camp. But it was so much more than fun. That’s the week I began to wake up spiritually. I’m 40 now, and I have still not been the same since then.
Since that summer, members of my family have kept coming back. My dad started taking our youth group and volunteering as a group leader. He even had a hand in developing some of the camps’ earlier curricula. After Chad and I married, he started volunteering at camps. Then I joined him. Now our oldest daughter is a camper. With the exception of a couple of years, my family has been involved in ACU Leadership Camps since that summer of 1988.
We keep coming back for a number of reasons, and I’ll blog about those tomorrow. But one of them is this: I still don’t want to miss a minute.
PREVIOUS POST   NEXT POST
SHARE: